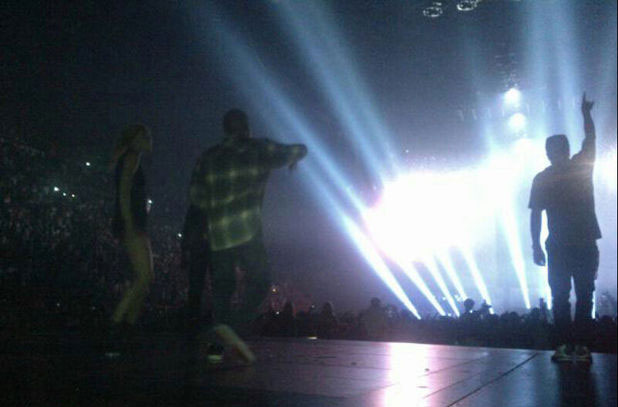 Singer actress Gwyneth Paltrow is in the hot seat after allegedly tweeting the n-word on her Twitter after watching Jay Z and Kanye West’s Watch The Throne performance in Paris.

A tweet went out via Gwyneth’s Twitter feed reading “N*ggas in Paris for real,” along with a picture of Jay Z, Kanye and Paltrow on stage.

Paltrow tried to defend the tweet by tweeting another post to her followers saying “Hold up. It’s the title of the song.”

Later, The-Dream defended the singer tweeting “Sorry for the Confu I typed Ni—as in Paris for real from Gwens phone” admitting that it was actually he, on her phone, who tweeted to her account; and it was The-Dream who actually snapped the photo of Paltrow onstage with Kanye West and Jay-Z.

“My bad I was Fkd up please excuse it! We were lit!” tweets The-Dream followed by telling his followers to calm down saying “N—a doesn’t have any power over me which is why this will be the last thing I say about it.”

Meanwhile, while The-Dream and others like Russell Simmons came to the defense of Paltrow, conscious rapper Q-Tip did not defend Paltrow, rather saying the actress, mistake or not, heated moment or not, should have still been more “truly sorry” for the tweet, hers or not.

Q-Tip explained that he has met Paltrow and she is cool people but still there are people out there who are going through more complexities than others and deserve a true apology for the tweet on her account.