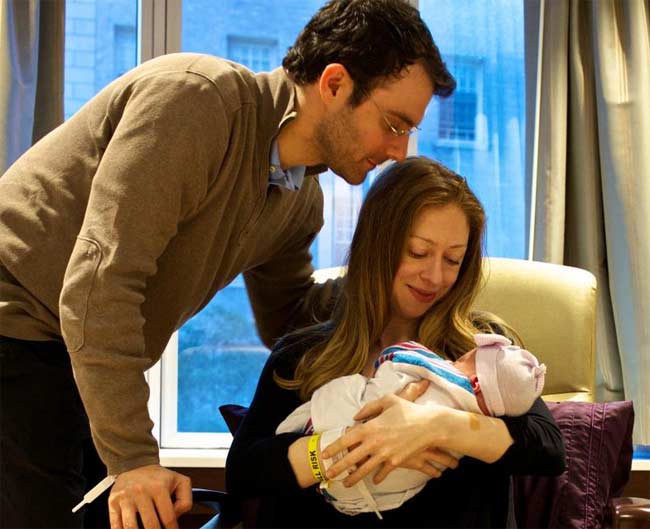 Chelsea Clinton, the daughter and only child of former US President Bill Clinton and former first lady Hillary Clinton, has given birth to the Clinton’s first grandchild, a baby girl named Charlotte.

Chelsea Clinton made the news official over social media site Twitter in a tweet about her giving birth to her and her husband Marc Mezvinsky’s baby daughter Charlotte Clinton Mezvinsky.

Clinton shared a tweet saying that her and Marc are “full of love and gratitude” after she gave birth to their new baby daughter.

Welcoming their first grandchild, newly grandparents, Bill Clinton and Hillary Clinton are said to be just as happy or possibly even more happy at becoming new grandparents than Chelsea is at becoming a new mother.

It was first Chelsea who shared a picture of herself and Marc holding their newborn daughter Charlotte followed by grandma Hillary Clinton sharing another photo of her and grandpa Bill Clinton holding baby Charlotte.

At 7:03 PM on September 26th, we finally met Charlotte. We’re in love. pic.twitter.com/9ZCkoa6BPU

.@BillClinton and I are over the moon to be grandparents! One of the happiest moments of our life. pic.twitter.com/Cww4r8C9Zt