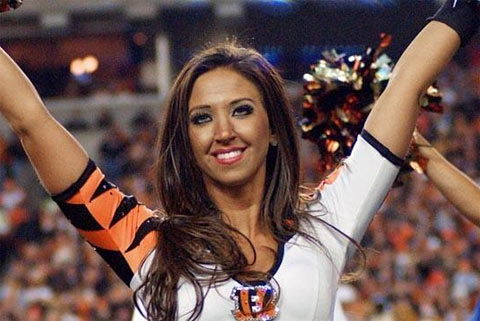 Sarah Jones, a former NFL cheerleader of the Cincinnati Bengals and school teacher, who admitted to having sex with an underage student while teaching at Dixie Heights High School in Kentucky, has been reported as possibly getting her own reality TV show and/or appearing on one.

The former cheerleader and teacher, who first lied to police and then admitted to her dirty deeds was indicted in March. Sarah Jones decided to plead guilty before steamy text messages and more would have been brought into a trial to avoid jail time on last month.

People are not just upset at the underage sex, but now over news that she may be getting a reality show.

Sarah Jones’ attorney allegedly has denied that there are plans for her to have a reality show which everyone has been talking about.

Sarah Jones, 27, who plead guilty to sexual misconduct and custodial interference with Cody York who was once her English student in 2008 and later whom she became a tutor for in 2010 and 2011, received 5 years probation and promised not to tutor or coach children. Jones’ mother Cheryl Armstrong Jones, a former school principal, also plead guilty for fiddling with evidence.

Allegedly the relationship between Sarah Jones and Cody York started in February 2011, according to a plea by Sarah Jones. And yes, the two claim they are in love and are still an item.

Jones’ ex-husband Nathan Wilburn whom she was only married to for only six weeks in July 2011 thinks differently about this entire ordeal. Wilburn believes that Sarah Jones should have gotten locked up after all her lies and abuse to her student.

Others on the internet claim the incident would have gone a lot different if it were a man who admitted having sex with an underage girl student.

In other news, Sarah Jones is allegedly now a legal assistant hoping to become a lawyer after quitting her jobs.