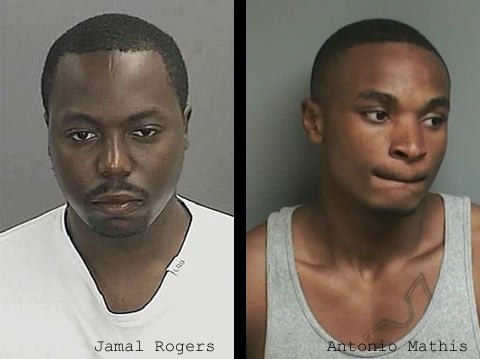 Recently a Michigan woman, Latonya Bowman, 22, almost lost her life and the life of her unborn baby after being bound, kidnapped, set on fire and shot. Bowman, who was nine-months pregnant at the time of the incident, was dropping off her 22 year-old ex-boyfriend and alleged ‘baby daddy’ Jamal Rashard Rogers, at his new girlfriend’s house when the garage door suddenly closed and at the time, an unknown gunman attacked her.

Bowman told police that the gunman, now identified as Mathis, demanded her to the ground and bound her feet and hands with duct tape and covered her eyes and mouth and proceeded to ask her did she know why it was happening and asked her how far long she was with her pregnancy.

Bowman was then put into the back of a car and driven to an field in Detroit where she says she was doused with liquid which was followed by the sound of a match striking.

Latonya Bowman, who was set on fire somehow got of the car and rolled around to put of the flames. When she attempted to put the flames out she was shot twice with one of the bullets hitting her in the back. To save herself and unborn child, Bowman pretended to play dead will still smoldering.

Allegedly, Mathis, at this point, thought Bowman was dead and left the scene, stated police.

After Mathis fled the scene of the crime, Latonya Bowman removed the duct tape and drove to a Shell gas station to get help.

According to police, Rogers who allegedly witnessed the kidnapping didn’t call 911 about the attack, however claimed he was sleep when the attack took place.

It was later revealed that Rogers who lives with his mother, girlfriend and Antonio Mathis, told his friend Mathis that he didn’t want the child.

Both the men were arrested as a person of interest.

Since the incident, Latonya Bowman has given birth to her newborn child.