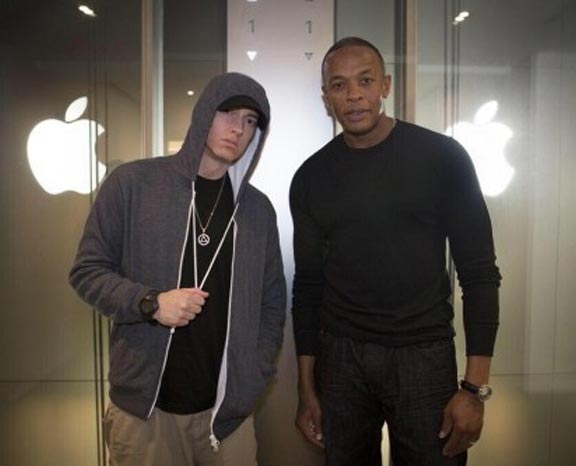 Hip Hop music mogul Dr. Dre, who recently made ‘Forbes Five’ list of wealthiest hip hop artists along with Sean ‘Diddy’ Combs, Jay-Z, Birdman and 50 Cent, could be on his way to becoming hip-hop’s first billionaire with a new possible Apple and Beats Electronics deal.

Sources are saying that Apple is in talks to buy Beats Electronics for $3.2 billion dollars. Beats is the company, which was founded by Dr. Dre and music mogul Jimmy Iovine, that owns the headphones brand Beats By Dre as well as Beats Music service.

This would be Apple’s biggest buyout that the company has ever made.

Neither Dr. Dre or Apple have officially confirmed the deal, however Dr. Dre somewhat hinted at the deal being a done deal in a video with his friend, singer and actor Tyrese Gibson.

The hip hop producer and businessman also shared a photo of himself and rapper Eminem at the Apple offices over his Instagram.

Check out the video of hip hop’s possible first billionaire, Dr. Dre, in what could be a celebration of the $3.2 billion dollar acquisition of his Beats Electronics company by Apple.