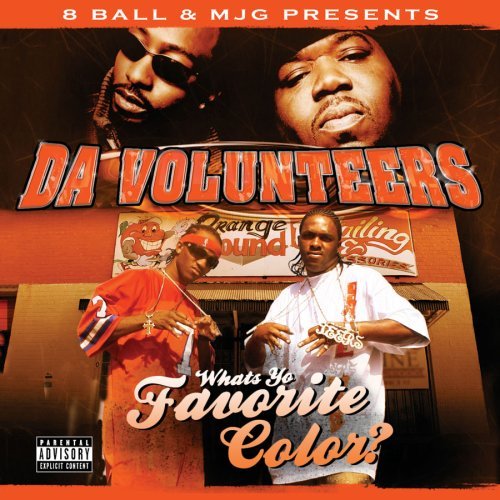 Through this monumental Oscar savvy shockwave, one of the rap entities that spawned from the fruits that followed the classic hip-hop movie that earned Jay Leno’s stamp of approval is Da Volunteers.

In Memphis, Tennessee it is now the post “Hustle & Flow” era which has impacted and catapulted various underground Memphian rappers and hustlers. Through this monumental Oscar savvy shockwave, one of the rap entities that spawned from the fruits that followed the classic hip-hop movie that earned Jay Leno’s stamp of approval is Da Volunteers. Made up of 12-Noon and J.Rock, Da Volunteers have instantly made noise within the southern realm of hip-hop with their cult following classic song “What’s yo favorite color?” which features legendary rapper MJG of the platinum recording rap group 8 Ball & MJG.

Da Volunteers’ album which is also named “What’s yo favorite color?” gives a spectrum of urban neighborhood economics and social aspects of Memphis.

This spectrum also culminates their hometown within a town, Orange Mound, which is one of the oldest black neighborhoods in Memphis, TN. Favorite color is an album dedicated to Orange Mound and rightfully fits Da Volunteers swagger that’s highly noticeable from their all orange wardrobes. The underlying meaning of Da Volunteers name itself implies the color orange which is also the school color of the famed University of Tennessee Volunteers.

The production on Favorite color challenges the traditional Memphis style to elevate its identity to a broader audience. Songs like “Dancin’ Wit Wolves” and “Misunderstood” have melodies that would tickle an east coast hip-hoper’s ear. In addition to the lead track single “What’s yo favorite color” are songs that hold anthem worthy clichés while describing Da Volunteers’ personality. Song titles such as “Strawberry 22’s” and “Tennessee Pimpin’” gives the listeners a good idea of what Da Volunteers’ daily exposure reeks. “Who got dat work”, which also features MJG, is laced with synthesized violin melodies that dictate the song’s path. 12-Noon boasts, “We got what you need/Al Green/ No Bobby Brown/ but if you’re looking for that Whitney we have that too.” phrases like this gives listeners a mirror image of Da Volunteers’ personality. “Clip fulla Hollowtips” is a very dark song with synthesized church bells harmoniously ringing in tune with hard hitting bumping bass tracks as J.Rock brags about the size of the banana clip on his gun being too much for King Kong to bear. “Simon Said” also has the potential to be a cult favorite with catch phrases like “Ini, Mini, Miney, Moe/ Catch dat n---a buy his throat/ if he holla let him go/ bust him wit dat 9 yo!” Other note worthy songs include “Dis is Our life” featuring Nasty Nardo who emphatically preaches a rap sermon on how he survives in the streets by being a stern, disciplined hustler. 12-Noon and J.Rock’s lyrics are accompanied with a vintage hip-hop sample singing player haters. Favorite Color also provides songs that have the potential to be played back from years to come with the likes of “Birthday Anthem.” One song that stands out from the others is “My Time” which surprisingly features a sample from PM Dawn’s “Die Without you” hit. The hand-picked producer shows range with sample selections that break Memphis boundaries.

Favorite Color has several hot spots with guest appearances by 8 Ball, MJG, and Nasty Nardo. The lyrical content displayed by 12-Noon and J.Rock nevertheless slows the album up leaving room for improvement for their next project. The production for Favorite Color is very innovative and goes beyond Memphis boundaries which may overshadow the content of the rappers causing all listening ears to strictly tune into the melodies and the beat which in most songs carry the wordsmiths. Despite these flaws, Da Volunteers’ faithful following from this album will remain huge with them strapping up and putting Orange Mound on their back, not to mention being co-signed by rap legends 8 ball and MJG. The future looks bright for this rap duo…bright orange that is.