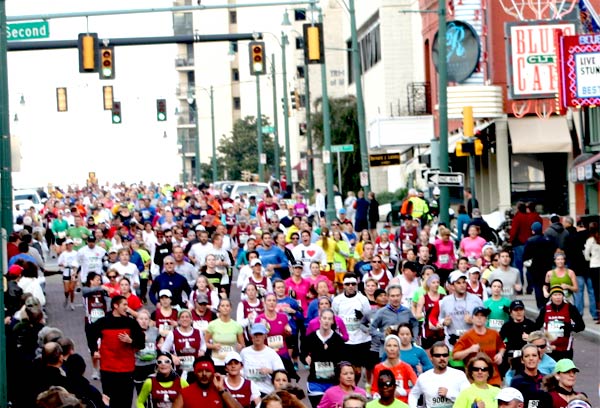 The 12th Annual St Jude Marathon Weekend scheduled to take place on Saturday, December 7th, has been cancelled due to Memphis weather conditions.

After warning advisories for an ice storm were issued out on Thursday, a dangerous mixture of ice and snow made its way throughout the West and South over the weekend.

Meanwhile, marathon runners who were expected to participate in this weekend’s race are looking on the bright side — they got to raise funds for St Jude despite not being able to run during this wet icy cold weather.

Richard Shadyac, Jr., CEO of ALSAC/St. Jude Children’s Research Hospital released a statement during the St. Jude Heros Pasta Party concerning their decision for cancelling the race citing it was for the safety of the race participants, volunteers and spectators.

Those who registered for the 2013 St Jude Marathon will get first opportunity to race in the 2014 marathon in a special registration.

In addition, if runners still want to run in a race to support St Jude, there are some options.

There are three upcoming races and registration fees can be applied to one of those races.

Another option runners have is to get a refund of registration fees or donate it to St Jude.

As a bonus for racers, local businesses are providing activities for runners which include Elvis Presley’s Graceland, The Memphis Brooks Museum of Art, amongst others.