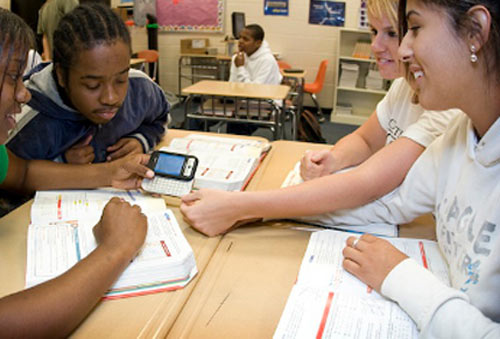 A Collierville High School student’s mother is a little upset about the old outdated cellphone policy for Shelby County Schools after her son was suspended and phone was taken after he texted her during his lunch hour.

According to Action News 5 (WMCTV), Natalie Stiver feels that the school policy is a little extreme and outdated for the ‘time we live in.’

Stiver’s son was suspended for two days and his phone was confiscated and held for a week.

Stiver may feel like this because the policy put in place bans any student from possessing their phone during the entire school day and in addition, students are requested to keep their phone either in their assigned locker, automobile or approved locations.

According to the Shelby County Board of Education, they deem not only cell phones but also personal communication devices as a distraction in the school environment. The devices according to their policy can be used to cheat on tests, posting on the internet, taking inappropriate photos, videos, bullying and more when they should be putting this time towards instructional time.

Stiver did add, they are not showing firmness with the policy due to the fact some of her son’s teachers at Collierville High sometime ask that students use their phones for research.

Meanwhile, Qualcomm, who started the Wireless Reach Initiative in 2006, state that they have discovered that after smartphones were distributed to low income students, their performance on standardized tests drastically increased. In North Carolina schools, students’ scores who were below the national average increased to 30%.

Why? Qualcomm’s Wireless stated that students could communicate much easier with their peers as well as had access to information that they needed anytime of the day.

How do you feel about school policies towards phones and communication devices? Should digital literacy be embraced by school and the policies updated?