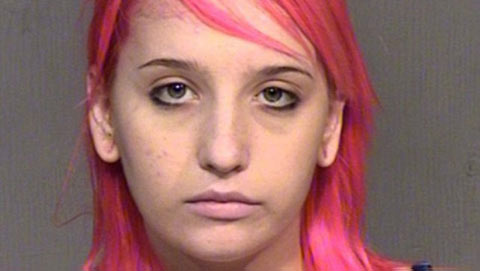 A pot-smoking Phoenix, Arizona teenage mother, Catalina Clouser, 19, is now in police custody after driving off with her 5 week old newborn baby on top of her car. The baby later landed in an intersection of the street. According to police, she seemed to have forgotten that the baby was placed on top of her car roof and also drove off without knowing that the baby had fell off.

Luckily, neighbors that lived across from the intersection saw the car-seat on its side and noticed a baby was in it and called authorities.

Allegedly, Catalina Clouser had been smoking marijuana early that evening with her boyfriend in a nearby park with friends. Clouser’s boyfriend is stated to have been arrested on suspicion of aggravated DUI after driving to the store to get beer with the baby in the car which upsetted her. An upset Clouser, reportedly went to a friend’s house to smoke yet again which possibly lead to her not being fully aware.

After hanging with friends, Clouser left the home of her friend’s around midnight and placed her newborn baby on top of the car roof.

Following the neighbors, who contacted authorities that a child had been left in the road, friends of Catalina Clouser came up and told the police that the baby was Clouser’s and that they knew both her and the boyfriend.

When Catalina Clouser realized her baby wasn’t with her, she evidently went back and the police were there to greet her.

It is uncertain if she was playing loud music which may have prevented her from hearing the baby fall off the car, but luckily the little boy is doing OK.

Currently the child is custody of Child Protective Services and Catalina Clouser has been charged with aggravated driving under the influence and child abuse.