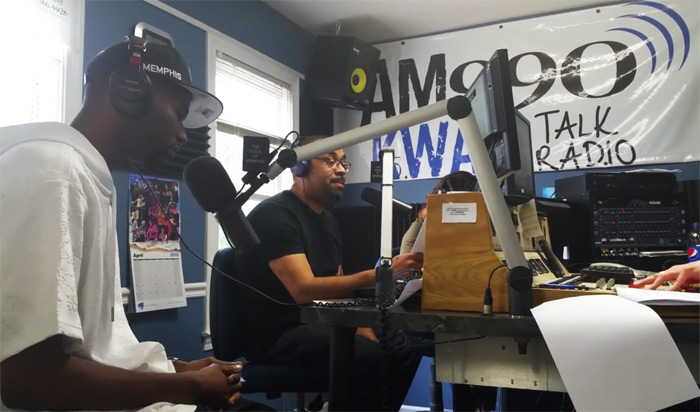 Myron: You are inside of the Memphis Music Project. And ladies and gentlemen, what you have heard was created right here in Memphis. I am pleased to have this young talented brother on the show. He has been in Memphis music for a minute. Ladies and gentlemen, yall give it up for Memphis own  rapper Teflon Don. What’s happening, man? Welcome to the Memphis Music project on the “What’s Happening Myron?” radio show.

Teflon: Oh, not too much.

Myron: Well, number 1, I’m glad to have you on the show, man. This is actually the kind of shows that I’ve been wanting to do for a long time, man. And you have been in the Memphis music game for a minute. You’ve done a lot, man. For me, I think it’s time for you to really blow and I want to play  my part in this whole process, man. So tell us, man. What’s happening? What’s going on with you?

Teflon: Well man, I just have a lot of doors opening, and I can honestly say that it took a long time but you know, with patience, you know, good things come to those who  wait and keep pursuing what they believe in and what they dream on, what their craft is and like myself I’m trying to build my label all the way. And so for me to build my label, you know what I’m saying, I had to stick with it, no matter what nobody said. Even family friends and everybody had something to say about me trying to build my business, you know what I’m saying. They were like “You’re too old for this. And this and that right there, this.” Everybody had something to say but through it all I kept fighting through no matter what nobody say. I kept going. And I continue to go through now.

Myron: Hmm hmm. That’s right. But tell me this man. Let’s go back to the beginning. How did you come up with the name Teflon Don?

Teflon: Well, I did 8 years military. I did 5 years reserve and 3 years active and I was a cook in the military. So, I got that name off of being a cook. It was a joke, man that people made about me ’cause I would be rapping in the kitchen beating on  the tables and all that with the pans and the spoons and then they was just like, “man you need to be called something else besides just Don. We gonna call you Teflon Don, since you trying to use some of the cookware.”

Myron: So I guess “Don the Cook” didn’t stick?

Myron: I hear you man. Who do you site as some of your musical influences, man? Cause I know coming from Memphis, everybody who loves music has to have some type of influence or some types of music that they were brought up on. Here, you can guess, man,  that it’s always  going to be some of the old Stax, a lot of the Blues, man and even some of the hip hop that has come out of Memphis. Who influences you to do what you do?

Teflon: I was influenced by watching Tupac Shakur and watching a lot of the Memphis pioneers that I took liking too. I mean we had a lot of stars come from Memphis All the way back to Al Green and from Al Green Days to David Porter and Al Bell. You, know, it started way back then. Until the next generation of the Al Kapone, Skinny Pimp, Project Pat, I can call a million names, you know.

Myron: Eightball, MJG all those cats

Teflon: Yeah. You know. Their spirit of music… you know, I was influenced by a lot of their music.

Rhonnie: You know, Myron. I would like  to ask a question that I’m sure our listeners would like to know.

Rhonnie: We have a really large female fan base on this show and I’m pretty sure that a lot of these ladies would like for me to clarify for them because they are in their cars and not able to look at you on the webcam so ladies if you’re listening I want to ensure you that he is a cutie pie. It’s not just all voice. There is the voice, there are the looks, so for our ladies that are listening, do you have some songs that you write for the ladies?

Teflon: Yes. Yes I do. You know, the name of my label is SoulStar Entertainment which means I come from my heart with my music. So I got a song for every feeling or emotion that you may be feeling. I betcha I got a song for that.

Rhonnie: So he’s sensitive too, ladies.

Teflon: Don’t get it twisted. I’m from Memphis.

Rhonnie: The thug tear. Just that one. Know what I mean.

Myron: So tell me this, man. You have done a lot of stuff and like I said, you been around for a minute.so you have done a lot. Let’s talk about the whole project that you did with the Memphis Grizzlies.

Teflon: That project  I did with the Grizzlies was one of the biggest things I could have ever done because I was tryna come up with a song that I could use that’s Memphis but  the whole world can relate to what I’m talking about. So, I did a song for the Grizzlies and  performing in front of so many people was a beautiful thing. I truly thank them for so much and there was a problem at one time with me getting my royalties but it was from  my publishing side with BMI which had me going back and forth but we had resolved the problem, Man I always been a Grizzlies fan and I love Memphis, period. Tiger, whoever.  If you doing something positive, I’m with it.

Rhonnie: I heard that.

Myron: I hear you. Well, man I know that there is this one particular.. Cause you had a lot to go on… It’s one particular incident, well let’s call it a situation that I want to mention with everyone. You actually had a sort of a situation with your name with a sort of well known national rapper by the name of Rick Ross. What was that whole thing about? I know that Rick Ross had the Teflon Don album to come out . But uh, what  I know there are some legal issues and everything surrounding that, so…

Teflon: It’s all good. I want to talk about it. What happened was, he put out an album.which was cool. It was a great album. A platinum project. The problem I had with it was basically that when he moved his business to Memphis, with the WingStop, the marketing plan that they had that to go along with that, it stated that Rick Ross, Teflon Don, Memphis, you know what I’m saying, so when people googled “Teflon Don and put in Memphis”, Rick Ross was all over the platform where I get my money from and that’s where the problem came in but we resolved all that. Everything is cool and  I commend that brother. He’s opened up more businesses than any rapper out here in Memphis so he has opened up more jobs in the community and I think that’s a good thing.

Myron: And I can understand your issue with the name and everything you know when people  look up names and stuff on Google because I’ve been Myron Mays since 1973 and 1/2  and apparently some guy decided to go shoot up a library and everything  and his name is like one letter off from mine  So everytime you look up Myron Mays, this guy comes up more than I do. Think about how I feel right now.

Rhonnie: I’m up in here with this guy who is shooting up stuff.

Myron: I..Well never mind. I know how you feel   and unfortunately, last time I counted, there are like 6 other Myron Mays in the country, so you know, I’m just praying they at least keep the name good so when you Google it, you can actually see some good stuff.

Teflon: You better know it.

Myron: Check it out man. Ima have you stick around for the next segment, but for those who want to look up more and find out more about you. How can they find you?

Teflon: Man I got everything locked in to my website which is teflondonmusic.com.

Myron: Well you got anything coming up that we can be on the look out for?

Teflon: Yeah. You can see a major campaign with this “Nobody But You” song. You will see it on TV, you will hear it on some radio stations. I don’t know how fast Memphis corporate will pick up on it. Right now we got 7 stations in Canada right now. And like I said we got  an internet campaign. I got movie projects, video game project still working and just stay locked in to my website and you can see all the updates.

Myron: Major things going on and that’s cool. Well check this out… The Memphis Music Project will not only be featured here on the “What’s Happening Myron” radio show. It will also be featured on the website as well, so later on tonight, you should be able to go to whatshappeningmyron.com and click on the Memphis Music Project graphic and not only learn about Teflon Don, you’ll be able to check out this interview, listen to the song “Nobody but you” and also check out the video as well because I know what’s happening, man and that’s just the way I do it. Thanks for stopping by the show, ladies and gentlemen, yall give it up for Teflon Don. On the way out we gonna play that song again…”Nobody But You”.