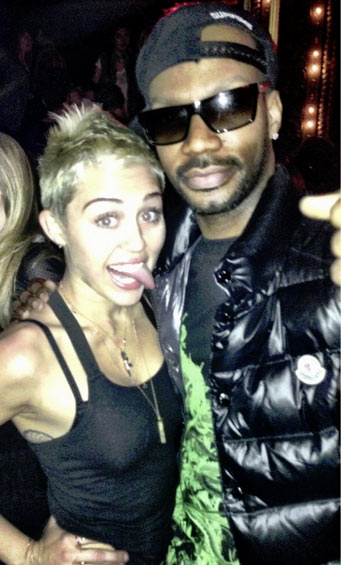 Miley Cyrus, known by many first as the teen actress Hannah Montana on the popular television series, has been making headlines for collaborating with artists and producers in hip hop including Juicy J and Mike Will Made It and for killing the hip hop dance twerking including at MTV’s annual Video Music Awards 2013.

Could the rumors that are claiming Miley Cyrus is pregnant with Juicy J’s baby be real?! Well it seems that the news was even shocking to Miley who heard about it just this morning, and decided to reveal the baby’s name.

Me: “did you know I’m pregnant with @therealjuicyj baby this morning” @CheyneThomas : “what are you gonna name it?” Me: “Juicy J Jr DUH”

Meanwhile, rapper Juicy J, who is promoting his newest solo release Stay Trippy, just recently appeared in a new video and song 23 by Mike Will Made it, along with Taylor Gang partner Wiz Khalifa and Miley Cyrus, who’s on the chorus of the song.