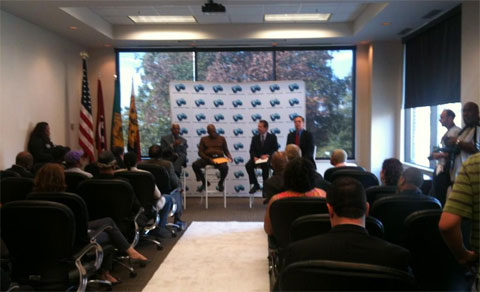 Memphis ‘Soul Man’ and ‘Hold On, I’m Comin’ songwriter and producer, David Porter, will be creating a national mentor program for musicians. Music greats met in Memphis at a conference on Tuesday, October 23, to discuss the program which will mentor young and up-and-coming musicians by developing a talent pool of new musicians via the The Consortium MMT (Memphis Music Town)

The Hall of Fame songwriter David Porter is looking to give back to the youth while re-establishing Memphis as the paramount of Soul music. Those who will be able to participate in the program will be given the essential tools to thrive and reach the next level which will range from vocal performances, fashion sense, musicianship and more.

The new non-profit organization will be located in an unused floor in the Greater Memphis Chamber’s building in Downtown Memphis (Falls Building, 22 N. Front).

It is not in concrete how applicants will be accepted, but the program will be free for those accepted into it.