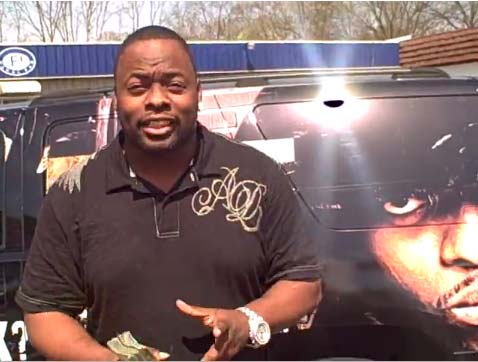 Fresh off a reported deal gone bad with Rap-A-Lot Records, and back with a new album, “Got Work?,” and a new mixtape, ” Certified Dope Boy,” Memphis rapper Criminal Manne, of Project Playaz and producer DJ Squeeky’s 47 Mobb, speaks out for the first time about his prior record deal with Rap-A-Lot Records and his future plans.

“I was in a little situation with Rap-A-Lot, you know, a lot of people didn’t know that, I was on contract with Rap-A-Lot 5 years, I was trying to get off contract 4 years,” the rapper revealed while standing next to his promotional “Got Work?” wrapped SUV ride.

The rapper went on to plug his new projects that he has been working on since his return to the scene.

As previously stated, the rapper mentioned his new album Got Work?, which was released in stores March 24, 2009 on IMG Records  featuring 8 Ball & MJG and heavy production by Memphis producer DJ Squeeky, and his new mixtape in collaboration along with DJ Scream for the streets entitled Certified Dope Boy mixtape.

You can sample the full mixtape here PLUS watch the video footage of Criminal Manne talking on his return to the scene after his record deal gone bad with Rap-A-Lot Records in the video below.