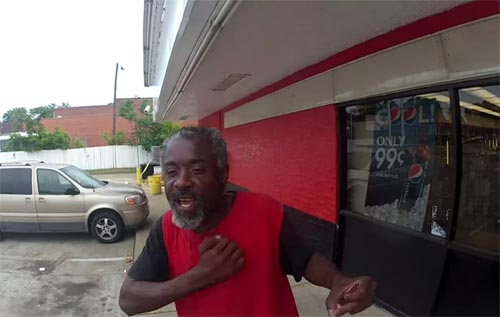 Sydney the homeless Memphis rapper pounds one hand on his chest, snaps the other hand’s fingers as he spits his flow and shows how it’s done.

Though the homeless rapper, in the video taped display of rapping skills, seemingly started with a ‘thuggish ruggish’ inspiration, he can be seen in a part 2 taping saying he’s actually a gospel rapper, because God is “awesome.”

I’m homeless, I’m from Memphis, but God is awesome.. I gospel rap

This is what the homeless rapper stated before going into his ‘preaching flow,’ which obviously touched on some of his personal experiences on the streets.

Touching on the apparent personal life struggles, the rap lyrics, included bars like:

My life was in shamble, my life was so so down
I was so low, I had to look up just to see the ground
But God took my life, hallelujah to his name
Every since I met the Christ, I ain’t been the same
That’s how I know that every thorn has a rose
Because God took a crackhead to the crack house put em in the church house, ..see I know

Watch the videos of Sydney The Homeless Memphis Rapper.