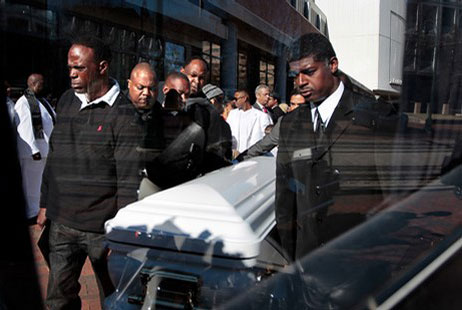 Memphis rapper Yo Gotti made a speech this week at the memorial service of his ‘friend’ Cecil D’Wayne “C-Baby” Tuggle, 32, of Cordova, who was shot in a reported drive-by shooting in Memphis last week.

While leaning into an SUV talking to someone on Eva, a side street off Summer Avenue, around 4 p.m., a reported silver Chevrolet Impala drove by firing four or five gunshots, according to witnesses.

Tuggle was struck by the bullets, collapsed and died in the street near his shop.

The case has not been solved, police are still investigating the shooting which reportedly their sources say could have been a retaliation shooting due to Tuggle being arrested over a dozen times including for drug trafficking, robbery and gun charges allegedly affiliated with gang Memphis Mob; reportedly one of Memphis’ largest, most violent gangs.

Still, friends of Tuggle say the North Memphis native had made a turn in his life for the better.

Roughly about 2,000 patrons were in attendance, according to The Commercial Appeal.

Yo Gotti spoke at the end of the service on how close he was to Tuggle calling him his ‘best friend’ while saying while many friends changed during his rise to fame, Tuggle remained the same friend.

“You were the littlest person with the biggest heart,” Gotti said referring to the 4’8″ Tuggle.

“You were not afraid to live and you weren’t afraid to die,” Gotti added while saying Tuggle wanted him not to cry should he die and to stand his casket upright so, even in death, no one would look down on him.

“We were so close, I tried,” Gotti said hinting that the rapper could not refrain from shedding tears for his lost friend.