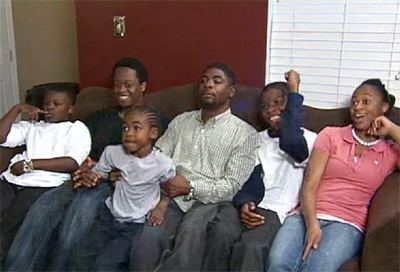 Rapper ‘Lil Chris‘ Parker and the Parker family of Memphis, TN appeared on ABC’s reality TV show “Wife Swap” tonight (July 30) and the 9 year-old rapper had his rap career temporarily taken away from him by his new temporary Cryptozoologist mom Tracy Robinson who believed the young rapper’s dad Robert Parker and mom Andrea Parker both put too much time into Lil Chris’ hip hop career than they put into their whole family.

The Parker family, which consists of the youngest Kaylon, 5, older brother Lil Chris, 9, Allyson, 14, Lataris, 14 and Al, 15, all were taking by surprise when they gave up their mom, Andrea, who is Lil Chris’ manager as well, for new mom Tracy who, along with her husband Rob, are devoted to Cryptozoology and hunt monsters in Florida. Yes, monsters! No, not any monster, but “The Swamp Ape!”

One week after arriving to the Parker family’s home, the new mom set the new rules into play and turns everyone into cryptozoologists (monster hunters). Robert Parker, Lil Chris’ father, wasn’t allowed to promote Lil Chris’ rap career and instead had to tag along with the rest of the family on a trip to Arkansas to look for “The Monster.”

Meanwhile, Andrea, Lil Chris’ mom, was at her new home where she was setting new rules similar to her own home but changing the son of her new family – Josh Robinson – into a rap star, which was met with multiple confrontations by the father Rob Robinson who was simply much more interested in hunting for “The Swamp Ape,” like he mostly did with his own wife Tracy Robinson before his new temporary wife Andrea Parker arrived.

They didn’t end up finding “The Monster” but “Lil Chris” and the rest of the Parker kids ended up having a fun time with their new temporary lives. Andrea also gave her new family a great new experience when son Josh, the lonely young man who was staying at home while his family sought out “The Swamp Ape,” became the new confident out-going, hip hop styled “Big Josh.”

The family had such a nice time swapping wives that they actually met up together, a “Wife Swap” first, and recorded a new hip hop “Monster” song.

In related news, rapper Lil Chris, who is currently working on a new album still with the support of momager (mom + manager) Parker and Parker dad, is actually set to perform in his next big show at the 1st Annual Memphis Hip Hop Expo being held at the Memphis Cook Convention Center in Memphis, TN on September 3-4, which is produced by website MemphisRap.com, and sponsored by media sponsor Memphis Flyer, and in part by the Memphis Grizzlies. For more info on the Memphis Hip Hop Expo, log on to memphishiphopweekend.com.

For more info, photos, music and more on rapper Lil Chris, log on to memphisrap.com/Lil_Chris.

Meanwhile, watch video clips of Lil Chris, the Parker family and the Robinsons on “Wife Swap”: