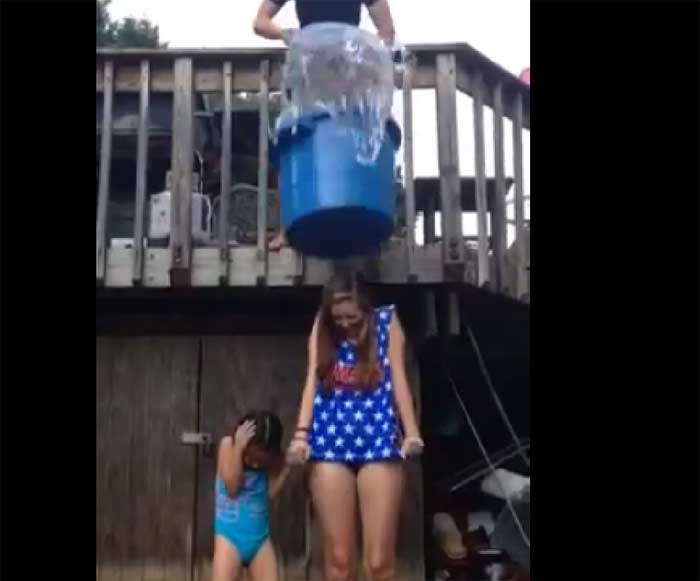 There is news circulating throughout social media sites that a Mississippi girl is dead after breaking her neck from an ice bucket challenge – the news is not true.

The news that is circulating claimed a young teen had died from her attempted ice bucket challenge.

The story goes that the Mississippi girl was in her backyard standing next to her sister as her cousin stood above her with a giant bucket of ice on a raised deck getting ready for the ice bucket challenge, when the entire bucket tragically slipped out his hand and came crashing down over her head sending her to the hospital where she was pronounced dead.

Well, the story is true of the ice bucket challenge fail, however the actual girl in the story has denounced the rumors circulating that she is dead.

Therese Todd, the girl shown in the video of the ice bucket challenge fail, spoke about her accident but said she, as well as the younger girl, are doing OK.

Therese Todd, who is not actually from Mississippi but is a 19 year-old college student from Silver Spring, Maryland, did end up in the ER from the accident, but only got the wind knocked out of her.

The 5 year-old standing next to her was floored also, but is OK as well.

Todd wants to encourage others to still take the challenge because she believes it “is important.”

ALS is known as Amyotrophic lateral sclerosis, a (neurodegenerative) disease which effects the nerves cell in the brain and spinal cord to the muscles.

Here’s the original video of Therese Todd’s fail at the ice bucket challenge.