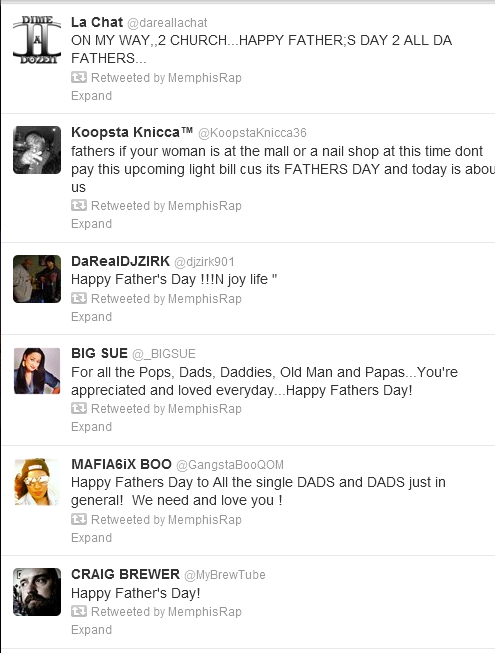 The day that many celebrate and honor fathers is here and this Father’s Day, June 16, 2013, those involved in the Memphis hip hop community are tweeting their appreciation and showing love to all fathers.

“It is easier for a father to have children than for children to have a real father.”

Rapper Lil Wyte, a well known proud father as displayed in the Father’s Day song “Something Special” featuring himself along with Wyte Music label mate and fellow friend rapper Miscellaneous, Soopa Nic, HighRolla, and Yawk, seems to have similar thoughts tweeting out his “Happy Father’s Day” to quote “all the real dads that handle their business.”

#HappyFathersDay to all the real dads that handle their business. I salute you all. It's not easy raising these heathens.

Others involved in the Memphis hip hop community joined in the Father’s Day honors and tweets including:

Film director, videographer and father Joe ‘Yung Spike” Gotti, who has his son along as he mentors him during his business trips, referred to his son as a “real TROOPER” in his tweet.

Happy Fathers Day to All the single DADS and DADS just in general! We need and love you !

For all the Pops, Dads, Daddies, Old Man and Papas…You're appreciated and loved everyday…Happy Fathers Day!

Former Three 6 Mafia affiliate Koopsta Knicca has words for fathers who may have relationships with women MIA on Father’s Day.

Music producer Drumma Boy chimes in as well with “#LoveYaKids.”

Salute to my KINGZ!!! Enjoy ya day gentlemen #LoveYaKids