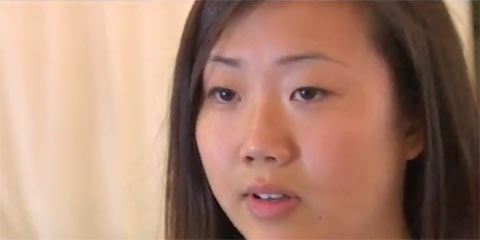 Diane Tran, 17, who attends Willis High School in Houston, Texas has a story to tell and while some kids miss school for nothing and many of them go to school everyday and still fail, she is still an honor student who was punished to spend a night in jail and fined $100 for truancy and tardiness.

Diane Tran has been missing school due to working not one job but two jobs (1 full-time at dry cleaners and 1 part-time at a wedding venue) to support two siblings after her parents divorced and moved away. Despite what has happened in her life, Diane Tran is still an honor student taking AP classes (college-level courses).

According to one Diane Tran’s classmate, Devin Hill, who spoke with KHOU-11, Tran sometimes stay up to 7:00 AM in the morning completing her homework.

The 11th grader, who doesn’t live near her parents, but instead lives with her employer’s family, who owns the wedding venue that she works at on the weekends, states she misses school because she is exhausted, but she loves it.

Tran works to provide for her brother that attends Texas A&M and a little sister which lives with relatives in Houston, TX.

Due to a Texas law, which prohibits a student from missing ten or more unexcused absences in a 6-month period, the school district is responsible for pointing the student to juvenile court which then leaves it up to the court decision to decide what to do.

According to Judge Lanny Moriarty, who’s over Diane Tran case, “If you let one of them loose, what you gonna do with the rest of them, let them go too? A little stay in jail is not a death sentence.”

Meanwhile, Judge Moriarty says he will think about Tran’s case after pressure from local media.

If Judge Moriarty decides not to revoke Diane Tran’s fine and sentencing, she will have to live with it being on her record.

Since the story made its way in the headlines over the weekend, petitions have been created for the student as well as a website (HelpDianeTran.com) set-up by the Louisiana Children’s Education Alliance, which has already raised over $67,000.

What do you think about Diane Tran’s story and the judges decision?