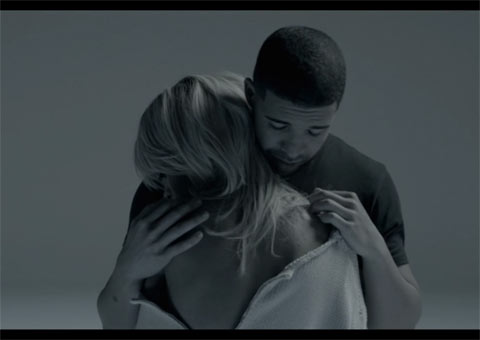 Rapper Drake, who will be on his international “Club Paradise” tour, released two videos over the weekend, “Take Care” featuring Rihanna and “HYFR” featuring Lil Wayne.

The video “HYFR” is a recreation of Drake’s Bar Mitzvah which also includes actual footage from his Bar Mitzvah. The lyric speaks about an ex whom he dated and prayed that he would make it as he talks about working with the negativity and the interview questions he’s asked that are compared to confessions.

The chorus of “HYFR (Hell Ya F-cking Right)” starts asking Drake questions such as: Are you high right now? Do you ever get nervous? You think them n–gas you with is wit’ you? Drake responds with Hell ya.

Lil Wayne’s verse talks about letting his manhood hang like there’s no curfew and keeping a few bad b*tches in his circle. Weezy goes on to spit: “After my session, she came over
I was aggressive, and she was sober/ I gave her pills /She started confessing and started undressing.”

Meanwhile, Drake’s second music video “Take Care,” which is the title track of the album “Take Care” released November 15, 2011, was set in black and white. “Take Care” features Pop star Rihanna in an off the shoulder sweater while being held and caressed by rapper Drake. The two music artists get very touchy as they perform the song “Take Care.”