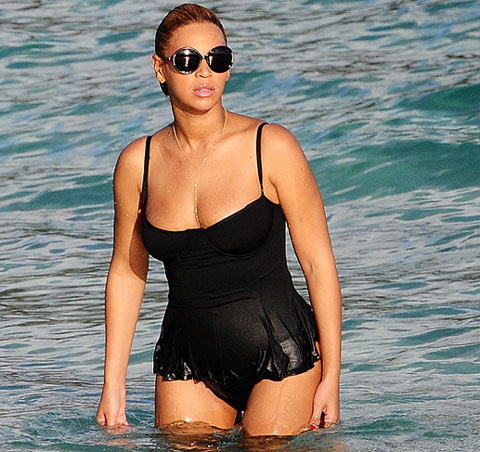 Mrs Carter aka Beyonce Knowles figured she’d show off her post-baby body following the birth to her bundle of joy Blue Ivy three months ago.

The new mother managed to pull it off revealing her curvacious body in a black one-piece swimsuit with spaghetti straps on Monday while she and her hubby Jay-Z vacationed in St. Barts, France during their wedding anniversary with daughter Blue Ivy Carter.

We can guest that rapper and businessman Jay-Z is proud that his ‘wifey’ maintained her sexy body after the controversial pregnancy which her body endured – allegedly nine months of stretching and changes – just to deliver their baby girl.

Meanwhile, as for the celebrity hip hop couple’s vacation, the two reportedly were in St. Barts to renew their wedding vows.

In related news, Beyonce shared new pictures of herself as well as personal pictures which show her spending time with family, wearing a bikini and more via her new website which recently launched. According to Beyonce, the website represents her life today and over the years through her eyes.

You can check out pictures of Beyonce wearing snorkel gear as well as holding a lit cigar up to her mouth.