Some may call a video featuring Samuel L. Jackson, promoting for voters to re-elect Barack Obama for a second term, a little extreme but in actuality the new viral online video does make one wonder and say “What the …?”

The video starts off like a Tim Burton movie and takes that route of narrating a children’s bedtime story with Samuel L. Jackson painting a vivid picture. The short film was directed by Boaz Yakin and Kitao Sakurai, paid for by the Jewish Council for Education and Research and written by Adam Mansbach. 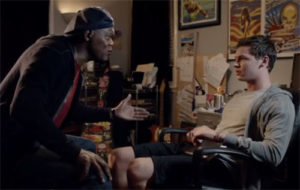 In the video, Samuel Jackson says, “In the silvery moonlight that bathes every town, people lie dreaming so safe and so sound. They’re warm in their beds and snuggled up in their sheets, but four years before they were out in the streets. Now if they don’t know what’s all at stake, except one girl wide-eyed and awake. Little Suzy is too worried to sleep, she can’t figure out why her family is so passive…”

The political lullaby goes on to talk about Suzy reading Mitt Romney’s platform which scared her to death, so Suzy decided to do something while time is left. Every time Suzy would address someone who seemed to not care about the election, Samuel Jackson popped into the picture to give them a dose of reality which ended with “Wake The F-ck Up!”

Since the release of the “Wake The F**k Up” video on September 27, 2012, it has topped the online political charts, according to reports.

Watch the Samuel L. Jackson ‘Wake The F-ck Up!’ video for yourself..

Wake The F*ck Up – Clean Version Safe For Work


F! Fueled ‘Wake The F*ck Up Video – Not Safe For Work