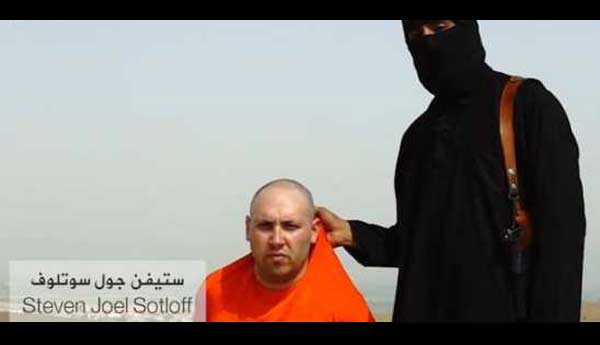 The Islamic state in Iraq and Syria, better known as ISIS, released a video beheading of another American U.S. journalist, Steven J. Sotloff and Obama has vowed “justice.”

It was less than one month ago that members of ISIS released a video of the beheading of American/U.S. Journalist James Foley believed to have been committed by a member of ISIS who was a rapper.

The video of the beheading of journalist Steven Joel Sotloff was posted on the Internet on Tuesday, September 2, 2014.

ISIS threatened to kill Sotloff before the video was released if President Barack Obama did not end airstrikes which has pummeled the group in targeted locations in Iraq for weeks.

Sotloff was a 31 year-old writer for TIME and other publications that attended the University of Central Florida in the 2000’s after growing up in Miami.

Sotloff went missing back in August 2013 while covering the Middle East in Syria.

After verification of this new video, which shows Sotloff in an orange jumpsuit kneeling in the desert next to an ISIS fighter, similar to the Foley video, the family, including the mother who issued a plea to ISIS to spare her son’s life, is of course grieving.

Meanwhile, Obama, who confirmed that the video is real, is in Estonia meeting with NATO amidst the Ukraine crisis but made a statement, better yet a warning that “harming Americans” is a “mistake” that America “will not forget” adding that the country’s “reach is long” and “justice will be served.”