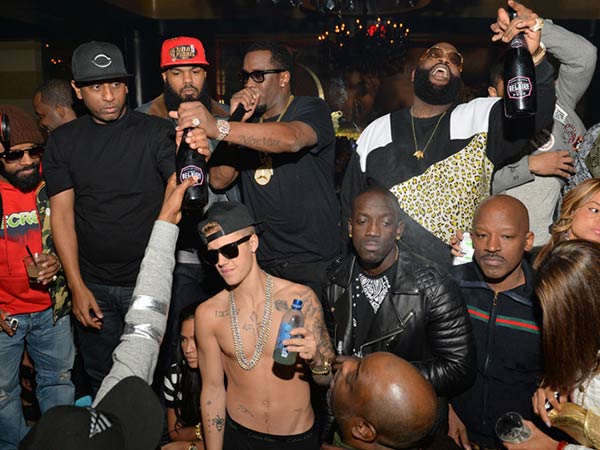 Justin Bieber, along with his reported new girlfriend, Chantel Jeffries, were ‘partying it up’ in Atlanta at Diddy’s Deleon Tequila launch party along with Diddy’s girl Cassie, Rick Ross, Jermaine Dupri, T.I. and others.

You would not think the young singer/rapper Justin Bieber would be in as much trouble as he reportedly has been through over the past few weeks.

Justin Bieber was recently arrested on DUI and for allegedly dragging racing and ‘popped’ for egging his neighbors’ house and at some point his home was raided by police where his rapper friend Lil Za was reportedly arrested for cocaine possession.

The young music star could be charged with felony vandalism for his egg attack and faces only a misdemeanor in his DUI case, but could be incriminated further as prosecutors are allegedly investigating the young singer even more.

All of that and it has still not stopped the party man from ‘getting his party on’ with some of the hip hop elite.

Allegedly banned at other night clubs throughout the nation, he was obviously welcomed as a guest of Diddy’s at Vanquish Nightclub in Atlanta, GA where Diddy has reportedly been hanging out for the production of Rick Ross’ new studio album entitled Mastermind, which Diddy is a co-executive producer.

Justin Bieber is seen several pictures shirtless ‘partying it up’ with the hip hop stars and posted another picture of himself in the studio possibly working with Rick Ross on his project.