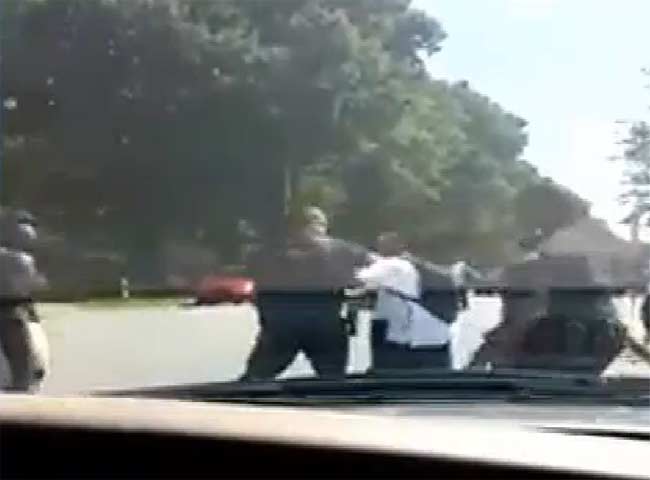 A video of a fight between students at Wooddale High School has gone viral online and shows Memphis police officers manhandling and pepper spraying students in the video.

The video, which surfaced on social media site Facebook this week, has many viewers questioning whether or not the Memphis police handled or mishandled the situation.

The video shows two female students punching and fighting each other surrounded by dozens of other students.

The huge crowd of students are seen dispersing as Memphis police come running and driving into the crowd.

Reportedly, a couple of the students including one of the girls seen fighting in the video were arrested, according to Fox Memphis.

Another teen arrested is a boy who can be seen manhandled by the police and slammed to the ground.

The girl Dante Gillie claims she was the one attacked and her brother was trying to help break it up but says the cops grabbed her and slammed her on the concrete with her faced mashed in the pavement.

Gillie also claims that police peppered sprayed her over her head and claims they did it while she was on the ground which is why it didn’t get on her face. In the video, a police officer can be seen targeted surrounding students with the pepper spray as they quickly disperse from around them.

Though no charges were filed against the students their mother Monica Mills is left upset at the fact that her children were the only ones that the Memphis police took into custody. The mother is also seeking disciplinary action against the officers.

Meanwhile, Gillie has been suspended from Wooddale for the fight.