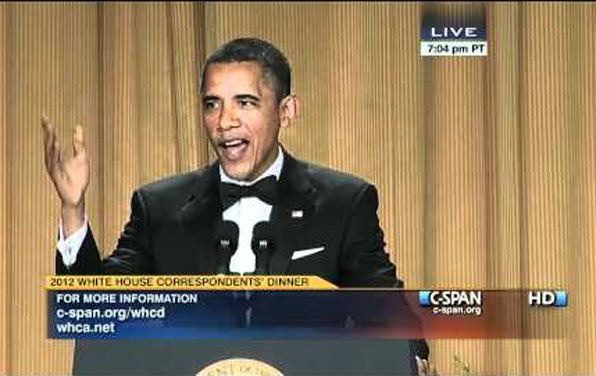 Barack Obama kills the crowd with comedy at the White House Correspondents Dinner Speech 2012. Jokingly starting behind the scenes, off stage without being aware the microphone was turned on where the crowd could hear, Obama can be heard saying, “Seriously guys, what am I doing here? I’m the President of the United States and I’m opening for Jimmy Kimmel? Why am I telling knock-knock jokes to Kim Kardashian” adding “Why is she famous anyway?”

Then after hearing the toilet flushing, as if the President was having these behind-the-scenes thoughts while going to the bathroom, the President comes from the back and takes the stage.

He starts with saying he was “so excited” to be there, after not sounding too excited behind the scenes, and then ‘gives a shout out’ to Jimmy Kimmel.

The President had countless punchlines, and left no one out while poking fun at even Hilary Clinton saying, “Despite many obstacles, much has changed during my time in office. Four years ago, I was locked in a brutal primary battle with Hillary Clinton. Four years later, she won’t stop drunk-texting me from Cartegana.”

He later jokes about Republican nominee, Mitt Romney and others. 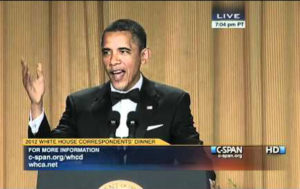