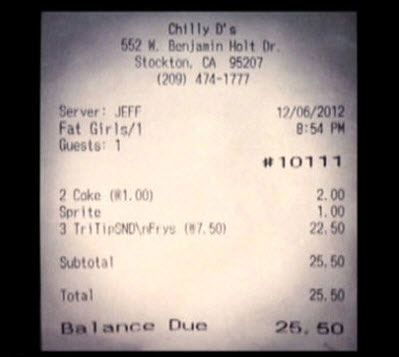 Imagine enjoying a nice meal at a nice restaurant while out with nice friends, when you ask for the check, the waiter brings you a bill that has Fat Girls typed on it – what would you think or do? Well that is exactly what happened to three friends while dining at Chilly D’s Sports Lounge in Stockton, CA at Cameo Club Casino.

Friends Christine Duran, Christina Huerta and Isabel Robles were all apparently identified as “fat girls” on a receipt at the California restaurant.

“I got the bill, and I was like ‘Why does the receipt say ‘fat girls’?'” Duran explained.

Her friends thought she was joking, but the receipt shocked them when they saw for themselves that she was not.

The waiter explained to them that “Jeff,” the name seen on the receipt, must have typed that on the bill.

When the three demanded to see a manager, what did the manager do – he offered them 25 percent off the bill, to the ladies shock.

Later, the bar manager at Cameo Club Casino, which owns Chilly D’s, later expressed that he was appalled and would do everything in his power to insure it never happens again.

Jeff, who admitted to typing in the insult, was suspended but still one of the women – Robles – says “They can’t change it.. This is something that we got to live with ­– all three of us.” 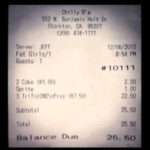