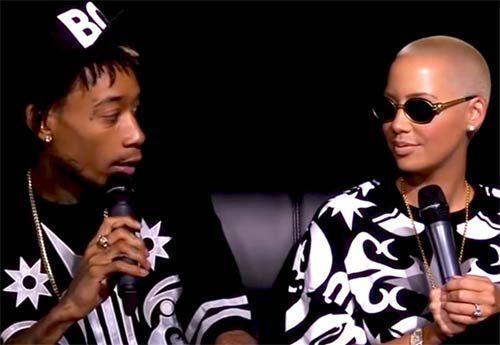 Newly married Wiz Khalifa responded to a question about his wife Amber Rose’s twerking video that she posted on Instagram prior to her wedding to the rapper.

The rapper claims when he got word about the video, he had mixed feelings saying “I was like, “what did you do that for?””

The hip-hop artist added he “wasn’t not into it” but just wanted to know why did she do it.

Amber Rose who was sitting next to her husband Wiz Khalifa in their interview with Angie Martinez of New York radio station Hot 97, says she did it because it was fun.

What was Wiz Khalifa’s response to that? “I was like, “alright, cool, whatever.””

The two were also asked about Miley Cyrus twerking in the interview with Martinez which Wiz Khaflia, who is collaborating with the singer on Mike Will Made It’s “23” song and music video, responded simply “young, wild and free” in regards to Miley’s twerking at the 2013 VMA’s adding “that’s my homegirl.”

Amber Rose, who is actually now being managed by Miley Cyrus’ mother Tish Cyrus, stated that Miley is a “real sweetheart.”

Watch Wiz Khalifa and Amber Rose “argue” in the video below.