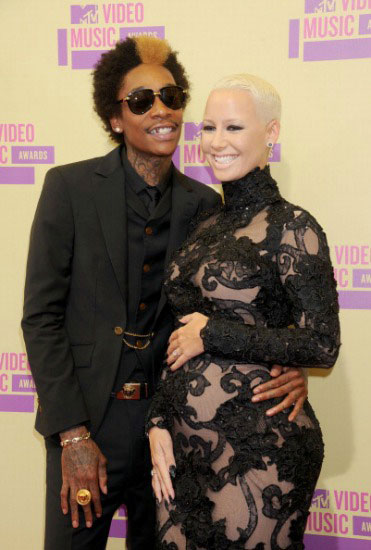 Everything is turning out to be all rosy for model and soon-to-be mom, Amber Rose, who’s due to give birth in 2013 to a little boy, but it seems that things had took on a turn for the worst, to say the least.

In an interview with Philly’s Hot 107.9, fiancé Wiz Khalifa, revealed everything had hit a sad moment when he and Amber Rose endured a miscarriage with their first pregnancy. Wiz says that they lost the baby soon after they found out they were expecting.

Wiz Khalifa got straight back to business and says that he wanted a baby.

“I was like, ‘F–k that, I want a baby.’ And she got pregnant again—like right away,” stated Wiz Khalifa.

After Amber Rose was pregnant for the second time, the two decided not to reveal the pregnancy until the second trimester which is from 13-27 weeks.

Wiz Khaflia, who is extremely excited about being a new dad, says he ‘can’t wait’ and it inspires him each time he goes to the doctor with Amber Rose to be the best dad.

While Wiz Khaflia looks to be the best dad, he’s going to be having a time during the water birth Amber Rose says she will have. Amber Rose states that she will not take any type of pain medication so her soon-to-be husband can never complain.

Amber Rose and Wiz Khaflia are expected to be getting married after the baby is born.