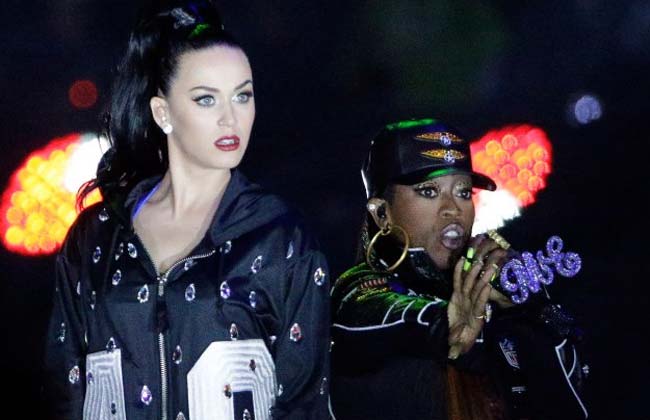 Katy Perry, joined by Lenny Kravitz and rapper/producer Missy Elliott, all turned the heat up during Super Bowl Halftime with a concert performance.

Katy Perry, who came out on a golden lion with red flaming eyes singing her hit “Roar” also performed her hit songs “Firework,” and “Dark Horse” as Lenny Kravitz joined her for a duet of her hit music single “I Kissed A Girl.”

As we reported earlier, Katy Perry was not joined by “Dark Horse” collaborator, Memphis rapper Juicy J, maybe for the reason that the rapper’s lyrics may have been too risque.

Following cutting her Dark Horse song short at Juicy J’s part, Katy went into her duet with Kravitz then Missy Elliott joined in on the show to rock her past hits.

Check out the video performances of Katy Perry, Lenny Kravitz and Missy Elliott at the 2015 Super Bowl during the Halftime Special show.