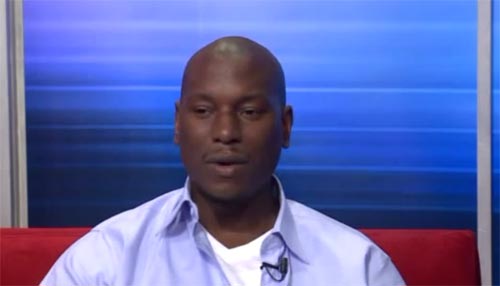 R&B singer/rapper, model and actor Tyrese Gibson spoke on how elated he is to be back in Memphis. The 33 year-old star is in Memphis this weekend for the Sisterhood Showcase in which he will be performing on June 2, 2012 on the main stage at 7PM.

The star sat down with WREG 3 a CBS-affiliated television station in Memphis to speak about his projects which include getting back together with singers Tank and Ginuwine for their group formed in 2007, TGT.

“I’ve never been in an R&B group in my life. I’ve always been a solo artist and we’re looked at as the R&B Avengers,” Tyrese told hosts Alex Coleman and sit-in host Corie Ventura for Marybeth Conley.

Tyrese went on to talk about his new book Manology with Rev. Run which is a book about trying to get women to understand men.

“I’m one of them people at this point, I have a responsibility to speak on and make people aware of what I know. Because there are a lot very talented,very capable people out here, but that don’t have sense of direction. They don’t know how to go about what they’re trying to do career wise, their love life, their personal life, and so, I’ve been through some stuff… I feel a responsibility to speak on what I know,” stated Tryese.

Tyrese later talked on how his career launched after the Coca Cola commercial at the age of 16, in which he appeared on the bus singing. Afterward, he touched on the movies that he’s starred in which include Transformers, Fast and Furious.

According to Tyrese, a 6th installment of movie Fast and Furious is underway which he will be getting ready to shoot in a few weeks.

And for those who will be attending the Sisterhood Showcase this year, a joking Tyrese said his wardrobe will be “baby oil and shoes.”

“Go get the album (Open Invitation),” Tyrese says before ending his interview.