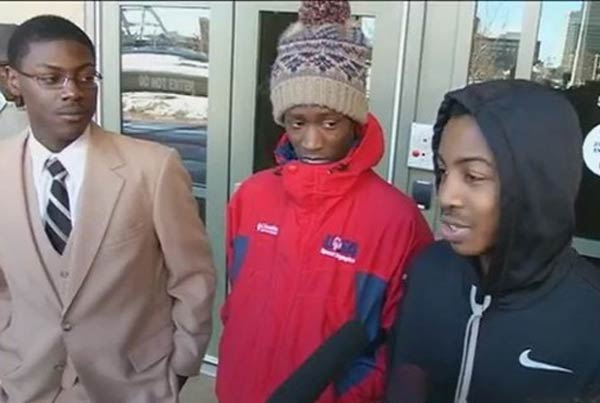 Three teens were arrested on last week by a police officer despite the teens informing the officer that they were waiting for a school bus.

The three teens, Raliek Redd, 16, Deaquon Carelock, 16, and Wan’Tauhjs Weathers, 17 reported to be star athletes for Edison Tech high school were arrested outside a store in downtown Rochester, New York while they waited for a school bus to pick them up to go to a basketball scrimmage.

Reportedly, a store location, which is across from where the three young men were standing, had problems in the past with teens so the police officer who was manning the area felt it was necessary to make them leave.

According to the teens, the officer asked them to disperse and they repeatedly tried to explain to him that they were waiting on the school bus, a yellow bus, but he wasn’t hearing them.

The teens told the officers that they were doing as they were instructed – to wait for the bus there.

When the school bus arrived, the teens were being arrested for not leaving.

Their coach, Jacob Scott, who exited the school bus, said he tried to reason with the police officer(s), who then advised him to leave or he would be arrested also.

Scott said that one of the officers told him that he had a big enough wagon to take him and the rest of the basketball players downtown.

The three boys were arrested on disorderly conduct charges, which have since been dropped, following news reports.