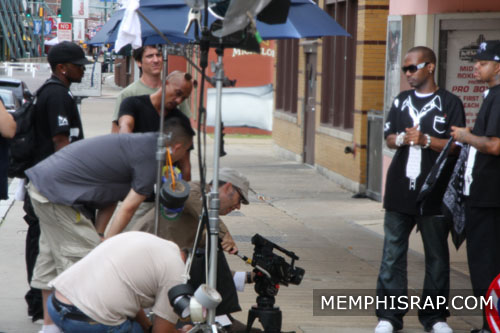 The shoot which was filmed at multiple spots throughout Thursday starts out in this video clip in Downtown Memphis, TN at the Historical Daisy Theatre on infamous Beale Street.

In the video clip, Juicy J can be seen in front of the video camera doing a scene for the music video as he approaches the MemphisRap.com cameras and talks briefly about the location of the video shoot and the new Three 6 Mafia album “Laws of Power” as Juicy J, on camera, jokes about his “archive” of jewelry.

“It’s going down, I’m just doing a lil something, this old jewelry from the archive,” states Juicy J.

Later in the behind the scenes look at the video shoot, more sneak peeks of the video shoot scenes can be seen as the clip cuts to DJ Paul who’s joking with a label rep of Sony Music about going to the bathroom in the alley behind the building.

DJ Paul can then be seen talking on camera with MemphisRap.com while standing in front of the music note placed on the ground honoring Three 6 Mafia for their Academy Award, as the cameras pan down on the honorary emblem.

Next, Juicy J can be seen having fun in a face-off with MemphisRap.com cameras with a camera of his own as DJ Paul jokes about the incident stating, “both of ya’ll do a ten paces and draw, we gon’ rewind back and see who caught each other first.”

Check out some of the behind the scenes photos of Three 6 Mafia’s “Lil Freak (Ugh Ugh Ugh)” official music video shoot below: