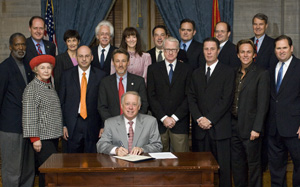 Governor Phil Bredesen was joined by state legislators and members of the music industry in Nashville early Wednesday morning at the Old Supreme Court Chambers on the first floor of the Capitol during a copyright infringement bill signing. The Senate Bill 3974 which was passed will require Tennessee public and private colleges and universities to ensure and make an effort to prevent computers on the campuses from being used to illegally share copyrighted music via peer-to-peer file sharing programs like Limewire, Bittorent, BearShare, BitComet, iMesh, Vuze and others.

According to a statement by Bredesen, the illegal downloading of music has placed a negative effect on the music industry and currently he’s proud that Tennessee is taking action to prevent it.

Since the bill has passed, many of the campuses will now have to write up new computer use policies and ethics codes to ensure that any copyrighted works isn’t being shared using their networks and connections.