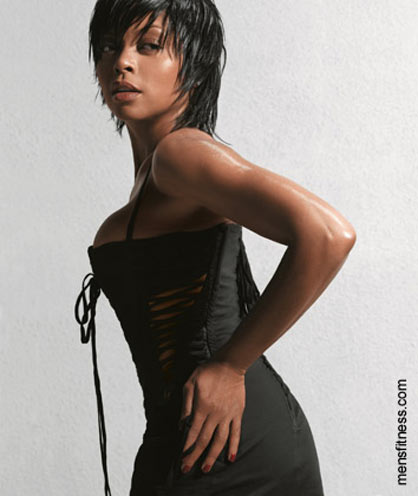 Sexy oscar-nominated actress Taraji P. Henson has posed topless, yes half nude, for the September issue of Men’s Fitness Magazine. Known for her roles in the movies Hustle & Flow, The Curious Case of Benjamin Button and most recent in the Tyler Perry directed I Can Do Bad All by Myself, the very sexy Taraji, full name Taraji Penda Henson, 38, can be seen in her topless photo wearing only black underwear while posing in sexy outfits for other photos.

Offscreen, she’s a 38-year-old single mom who says guys she dates are often intimidated. “Most men are fragile,” she says. “I’m a successful woman, in the public eye, and raising a kid by myself. It can leave guys feeling like, ‘Damn, how can I have a chance?'” Answer: “Just be a man!”

Have a Gentleman’s Touch
“A woman is gentle, soft, delicate, and a man’s position is to protect her-help her up stairs, make sure she’s in the car safely fi rst. Take good care of your woman, and the sky’s the limit!”

Avoid Mama Drama
“Date a woman with children only if you are ready to man up, because it’s a position that comes with responsibility. If you don’t want anything too serious, then stay with women with no kids.”

Keep in Touch-Even When
You’re Out With the Boys “The worst excuse you could ever use is, ‘My phone broke.’ Did the 10 other people you were with not have phones? Just make it happen. Even the Bat Cave has a phone!”

Be Her Safety Net
“When I meet a person and that chemistry is there, I cannot hide the electricity. I need to learn more about him, and once I feel safe, I’m gone, I’m in love, and I give it my all!”

Never Give Up on Love
“Don’t be bitter if a relationship doesn’t work out; it wasn’t meant to be. You can’t be cut off to love because you’re learning and getting closer to the one.”