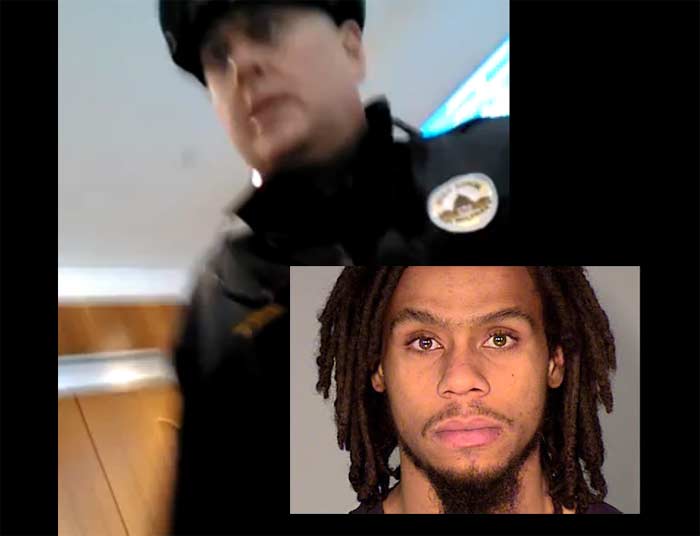 Captured on video, a man in St Paul, Minnesota was violently arrested because he would not say his name when questioned by police while sitting on a bench waiting to pick up his kids.

The man in question, Chris Lollie, was sitting down waiting to pick up his children at New Horizon Academy in Downtown St. Paul as he was approached by an officer and questioned on who he was.

Apparently, a store clerk had called the police because the man was sitting in front of his store in the skyway.

In the video, Lollie tells a female officer, that he was walking with, that he had been there no more than 10 minutes waiting to pick his kids up from school.

As the female officer begins to tell him what the problem was, he can be heard finishing her sentence with “the problem is I’m black.”

He explains that he was alone, by himself and not with a group of people and was not causing any problem.

While walking with the female officer explaining to her, a male officer, who is believed to have been the one who initially questioned him, approaches Lollie attempting to restrain him.

As Lollie pulls away from the officer saying, “don’t touch me,” the officer responds with “you’re going to jail then.”

Following this, Lollie’s camera falls to the ground and there is nothing but darkness as an outrageous scene can be heard taking place in the background.

Though it happened in January, the video has surfaced after police confiscated the phone for approximately six months.

Arrested on trespassing, disorderly conduct and obstructing the legal process, all of Lollie’s charges were eventually dropped.

Check out the video of Chris Lollie being apprehended for sitting on a bench waiting for his kids.