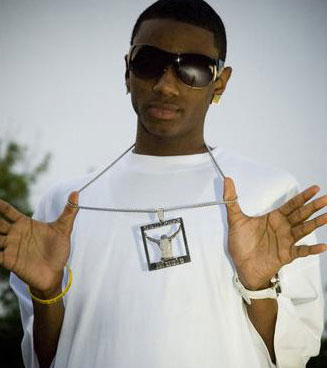 When interviewed by journalist Toure for BET’s The Black Carpet, rapper Soulja Boy aka Soulja Boy Tell Em, born DeAndre Cortez Way, 18, recently made some shocking comments when he was questioned about what historical figures he hated the most.

According to Toure’s blog, when he asked Soulja Boy “What historical figure do you most hate?,” the rapper was stumped so Toure said, “Others have said Hitler, bin Laden, the slave masters…” which Soulja Boy responded with the following:

“Oh wait! Hold up! Shout out to the slave masters! Without them we’d still be in Africa. We wouldn’t be here to get this ice and tattoos.”

Soulja Boy’s latest controversy had the rapper in a short trade of disses with rapper Ice-T.

Soulja Boy’s latest album Souljaboytellem.com is in stores now as of October 2007 and the rapper is currently working on new album iSouljaBoyTellEm expected to drop December 2008.