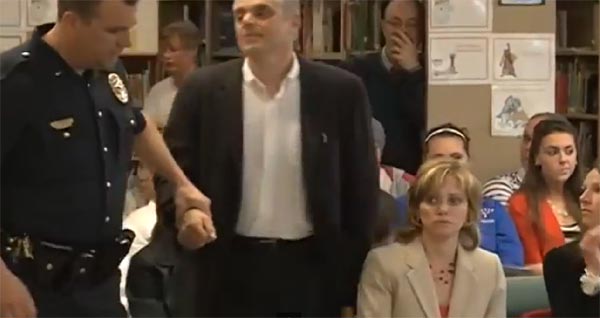 A concerned parent in New Hampshire was arrested on Monday after speaking out against a school-required reading novel which contains a graphic sex scene being detailed in the book.

The book is entitled “Nineteen Minutes” by a local New Hampshire author, Jodie Picoult, and contains themes about a school shooting but that’s not what parents are concerned about.

Parents attended a school board meeting with Gilford school officials to address concerns regarding the reading required by their teen children.

Many parents believe the rough sex scene between two teenagers described in the book is inappropriate for their children to be required to read including parent William Baer.

William Baer, a father of a 14 year-old female student, is seen in the video speaking out at the meeting while being told he already had his assigned time.

The New Hampshire school board meetings come with a policy containing a 2-minute rule giving each parent one time to speak for two minutes.

Baer spoke out after having his two minutes following another parent speaking, so was encouraged to sit down and be quiet and not speak any further.

Baer was told he was disrespecting the school policy at which point he questioned was the school-required book respecting him as a parent not wanting such sexual material being assigned to his daughter.

Baer was arrested by an officer seen approaching him in the school board meeting, then handcuffing the parent and escorting him outside.

When asked why was he being arrested, he was told he was being charged with disorderly conduct.

Watch the video of a concerned parent being arrested for violating a 2 minute per parent board meeting rule.