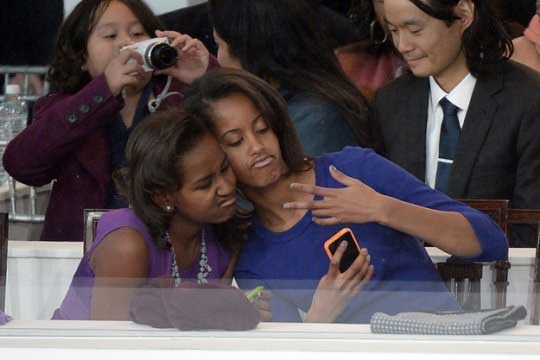 First daughters Sasha, 11, and Malia Obama, 14, were captured on camera mean mugging and chunking the deuces for their cell phone camera during the 2013 presidential inauguration parade.

While daddy, President Barack Obama was enjoying the celebration of taking office again for another four years, Sasha & Malia had some fun time to snap some photos at the event.

In the photo, both Sasha and Malia Obama were both mean mugging but it was big sister Malia chunking the deuces.

The two were having fun and who can blame them – just goes to show they are down to earth as well while still being so well behaved, as mostly seen.

They were seated next to mom and dad, Michelle and Barack, while the inauguration parade was going on.

The two were joined in photographs as a family with parents Michelle and Barack Obama also.

The Obamas bringing in another four years in the White House.