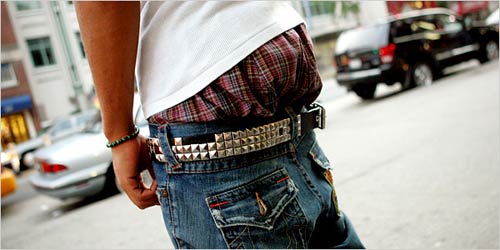 In Flint Michigan, it started last year, police officers were told they could arrest anyone in Flint wearing sagging pants then they could hit them with a $500 fine and a possible year behind bars!

The ‘saggy pants’ also give police a probable cause to search you.

Many were opposing the law afterward saying it was racist and illegal, yet the law continues to promote nationwide.

And, yes, it could soon be illegal to wear ‘saggy pants’ in Tennessee including Memphis. Memphis Representative Joe Towns and Senator Ophelia Ford are proposing a “Saggy Pants Bill” making it illegal in the “M-Town” as well!

Under his the ‘saggy pants’ bill, ‘saggy pants’ would be defined as far enough to reveal your underwear, or your posterior and, if passed, the first offense will be a $200 fine and for the second offense, a $500 fine with possible jail time afterward.

So, what do you think?

Should saggy pants be considered a crime? Is is racist, is it illegal?

Here’s a couple of ‘saggy’ looks…