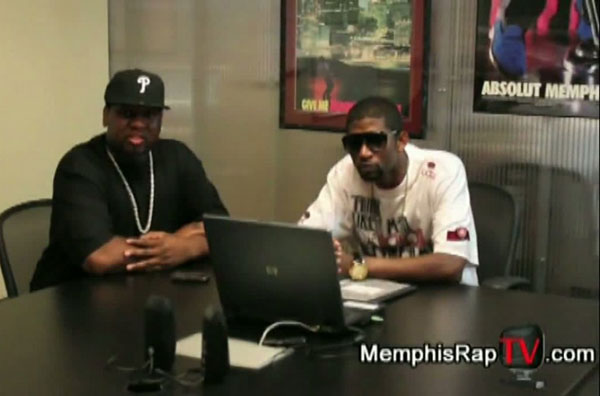 When you Google the name “Teflon Don,” the first results you see might be John Gotti, the Boss of the Gambino crime family, but when you type “Teflon Don rap” then the results you see now may be a mix between the album “Teflon Don” by rapper Rick Ross and the rapper himself Teflon Don whose latest album was entitled ‘God, Government, The Game.’

Recently rapper Teflon Don (@teflondon), joined by his manager Miami Mike (CEO of Palm Tree Entertainment known for managing artists such as Soulja Boy, SODMG and others) sat down with MemphisRap.com’s MemphisRapTV and discussed the music business, the origins of their names and more.

Teflon Don addressed Rick Ross’ use of his name but first Miami Mike, Teflon’s manager, explained the source of his name.

Following the Palm Tree CEO’s breakdown of his own name, Mike weighed in on what he thought regarding the name “Teflon Don” and its use.

“Everybody try to use the name Teflon Don like everybody try to use the name Scarface cause Teflon Don was a heavy hitter — just like Scarface was and just like Rick Ross was, so Rick Ross named himself after the real Rick Ross, which was a big time drug dealer, so to me when people do that I think they like it and really want top be a part of it,” states Mike adding that “whoever got the copyrights to it first, it’s they name.”

Well, rapper Teflon Don, who claims to have the rights to the name, says he got the name partly from his military background and part from his real name — Donald.

“I got a voice that dominates, so when I was in the Army, Sergeants said we gotta call you something.. so they said let’s call this mayne Teflon Don.. that stuck with me and that’s why I came up with the 3 G’s – ‘God, Government, The Game’ to go along with me.. I take that everywhere I go,” states Teflon Don.

When asked if he was planning any legal action for infringement, the rapper states, “No. Rick Ross is bringing me more fans, why would I say anything.. I love Rick Ross music, I’m a fan of his, we can do a song together. I got nothing bad to say about him,” followed by Miami Mike who added “..and business is business, like Soulja Boy, we in court right now.. somebody else had it before him,” referring to Soulja Boy’s recent lawsuit by another less known rapper William Lyons a.k.a. Souljah Boy.

Adding that the lawsuit was the reason behind the new name Soulja Boy Tell Em on the album, Miami Mike adds that though rapper Teflon Don (who claims rights to the name) has been using it for a long time, it’s still a name Rick Ross evidently liked and went with. Mike adds that although he knows personally the real Rick Ross who apparently isn’t exactly cool with the rapper Rick Ross using the name, he knows rapper Rick Ross is a “cool” guy and his “homeboy” who’s actually from Clarksdale, Mississippi.

Then ending on why he’s really addressing the issue, Teflon Don adds that “No, it’s no issue, we just wanted to clear it up with the people that’s getting us mixed up with the music.. I’m an independent artist and he’s a major artist, so he would have more press up about him then I would so it kinda flooded me out for a minute.”

In the interview, Miami Mike also addressed the Soulja Boy copyright a little more; then, both Miami Mike and Teflon Don, were asked about their take on why Memphis was not mentioned in the VH1 Hip Hop Honors, which they both weighed in on.

“It’s their event, they can put whoever they want to put on there,” stated Teflon Don.

“That’s why we need to put on our own event.. that’s why I thank Memphis Rap for doing their own event at the Cook Convention Center,” Teflon added referring to the 1st Annual Memphis Hip Hop Weekend & Expo event being produced by MemphisRap.com during Labor Day weekend, Sept. 2 through Sept. 5.

Then having his own take on the issue, Miami Mike adds “you know a lot of those people from Atlanta not from Atlanta, they just claim Atlanta.”

“Like even though Jazze Phae [is] ‘putting on’ there, he’s from Memphis but you know they say he from Atlanta but he stay there now.. that’s not the first [person] from Memphis — that’s just how it be, people they get their money they move,” expresses Mike adding that, “..everybody think you got to move to Memphis or Atlanta or L.A. or Miami to ‘get on.’ To me, it’s not where you from, it’s how hard you grind.”

Then validating his point, Miami Mike touches on and compares it to the success story of rapper Soulja Boy Tell Em.

“To me, when I go to schools to talk to kids about gangs and drugs and staying in school, I talked about Soulja Boy last night; he ain’t even from Mississippi, he from Atlanta but he came to Mississippi and got with me, I got him signed so it aint where you from.. it’s how hard you grind,” expressed Miami Mike once more.

“So that’ll kill all that.. he came to Mississippi.. had to make this happen cause he got overgrounded by people in Atlanta.. you go to a club in Atlanta [and] come out with 100 cds, so most time they throw that stuff away cause everybody down there trying to get on.. you get overshadowed. Soulja Boy came here, he signed with me, and that’s history, you can just Google it,” added Miami Mike.