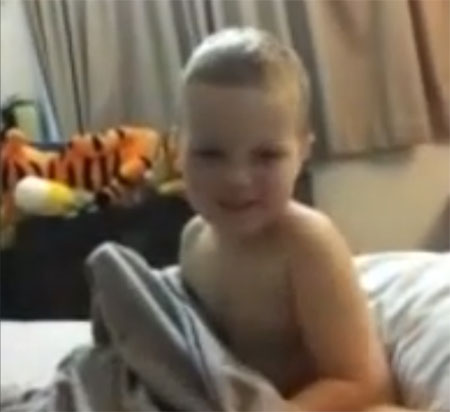 A three year-old toddler was videotaped by his parents as they discussed marriage and allegedly has a compelling argument on same sex-marriage. Will you agree?

When the father asked the toddler did he want to be married, he nodded his head yes.

The father seemed to have pursued even more and asked the little toddler who did he want to be married to. “Mommy,” he smiled as he played with the cover on the bed.

The young boy’s father then came back and told him that he couldn’t marry his mother because she already has a husband and this seemed to somewhat upset the toddler who questioned ‘why.’

So what did the father do? He asked his little boy did he want a husband.

Immediately the 3 year-old said yes and his father responded back telling him he couldn’t have a husband. This conversation led the toddler into asking why and the father telling his young son that he can have a wife.

“But I don’t want a wife… why,” the little boy mumbled as he began to cry.

“… because [Prime Minister] Julia Gillard says you can’t have a husband,” the father stated.

Do you think if the little boy was told he could have a motorboat and he could only have a blue one and not red, it would been the same outcome?

Watch the video to see how it turns out.