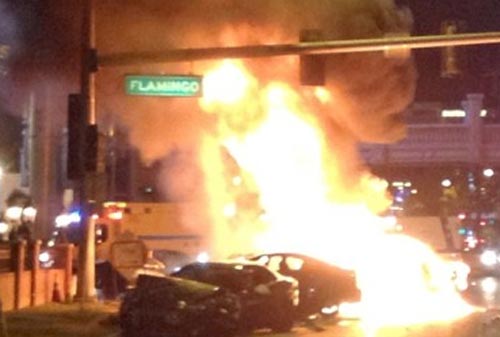 Oakland rapper Kenneth Cherry Jr., 27, better known as Kenny Clutch was the victim of an early morning shooting and crash on the Las Vegas Strip. The aspiring rapper, who was residing in Las Vegas, died after gunshots were allegedly fired from a black Range Rover at his Maserati.

According to authorities, Kenny Clutch and the passengers of the Range Rover had just left from the Aria resort hotel and had a dispute that spilled onto the streets. Reportedly, both were heading north on Las Vegas Boulevard at around 4:20 AM after leaving the resort. When the two cars approached Harmon Avenue, the passengers inside of the Range Rover allegedly began to fire at Kenny Clutch’s Maserati.

The gunshots caused Kenny Clutch to speed into an intersection hitting a Yellow cab, which exploded and killed both the driver Michael Boldon, 62, and a female passenger in the cab. Four other vehicles are stated to have been involved in the incident, which resulted in six others in being injured.

Kenny Clutch later died at a local hospital. A passenger in Kenny Clutch’s vehicle is stated to have suffered only minor injuries.

According to Kenny Clutch’s attorney, Vicki Greco, he was a good person simply trying to make it and only had minor traffic tickets and a civil case.

Meanwhile, authorities are on a manhunt for the suspects who were driving the black Range Rover which had custom rims and dark tinted windows. Las Vegas detectives say they have lots of leads coming in.