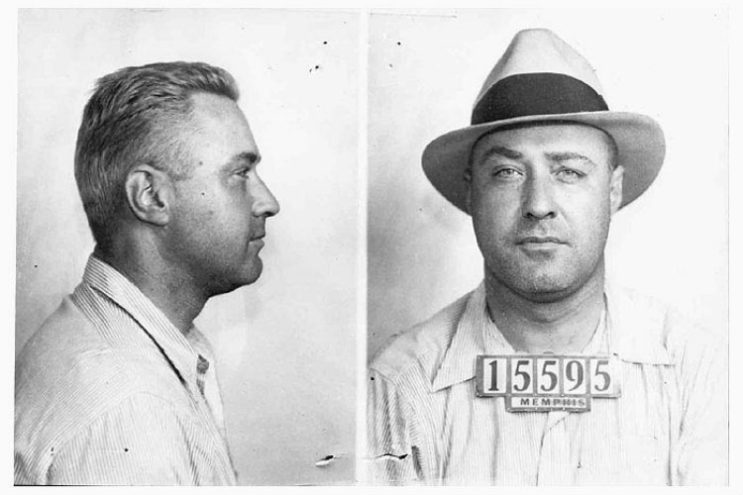 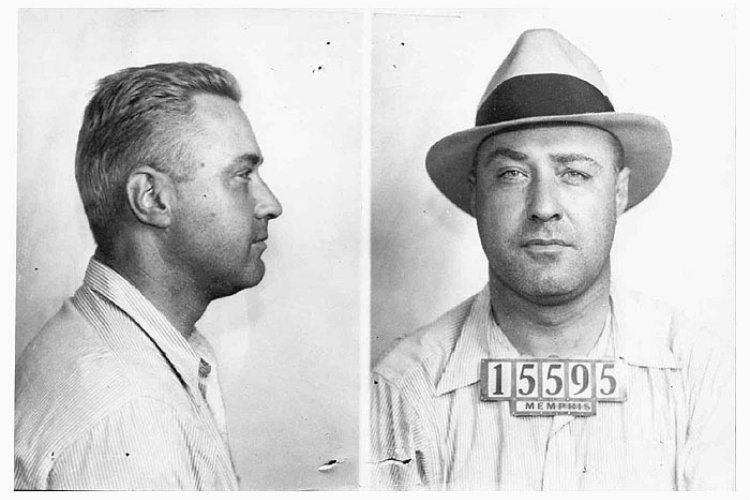 When you hear the name Machine Gun Kelly today, you may think of the rapper Machine Gun Kelly of Bad Boy/Interscope, known for his song “Wild Boy” featuring Waka Flocka Flame which made him an instant national sensation. What you may or may not have heard is the story of the original gangster (O.G.) “Machine Gun Kelly,” who was raised in Memphis and was known, at one time, as ‘the most dangerous man in America.’

Machine Gun Kelly, at the time he was sought by the FBI, had been deemed public enemy number one.

Kelly, born George Francis Barnes Jr., began calling himself “George Kelly” after a bank job in Texas where, with his machine gun, he shot his last name into a signpost as he and his accomplice – his second wife, Kathryn Thorne aka Kathryn Kelly, born Cleo May Brooks – made their get-away.

Now known as Machine Gun Kelly after that crime, Barnes was wanted for murders, bank robberies and more.

It wasn’t until his most famous crime of kidnapping oil tycoon and businessman Charles F. Urschel in 1933 from his mansion in Oklahoma City that he became a most-wanted man.

With that kidnapping, Barnes “Machine Gun Kelly” and Kathryn collected a $200,000 ransom from their victim’s family.

Charles was returned unharmed, but what Machine Gun Kelly and Kathryn didn’t know was that there had been a new law put in place to combat the popular, profitable kidnapping schemes of that time.

Under Lindbergh Law, which was enacted in 1933 just before Kelly’s crime, kidnapping became a federal crime punishable by life imprisonment or death.

Unaware to Kelly and Kathryn, their kidnapping became the first gangland kidnapping under the Lindbergh Law.

Not only did Kelly and Kathryn find themselves wanted in a nationwide manhunt for their federal crime, but FBI director J. Edgar Hoover announced that he would be personally taking up this case.

Machine Gun Kelly and his second wife Kathryn Kelly, a native of Saltillo, Mississippi, were now on the run stashing their money in farmhouses in the Oklahoma City area before they packed up and headed to Memphis.

Hiding out in Memphis with a friend’s 12 year-old acting as their own daughter, it wasn’t long until they ran out of money and needed to get back to their stash of cash.

Fortunately for Charles F. Urschel and unfortunately for Kelly and Kathryn, their millionaire victim provided just the evidence the police needed to track down his kidnappers.

Urschel, though blindfolded the entire time of the kidnapping, remembered hearing oil pumps nearby, a airplane flying by overhead and more.

Using his details to check flight schedules, police were led to the farmhouse of Robert and Ora Shannon, the parents of Kathryn Kelly.

Now the police knew where they were seeking – the notorious Machine Gun Kelly.

Sending Langford Ramsey, Kelly’s brother-in-law from his first marriage, along with their decoy daughter, 12 year-old Geraldine Arnold, Kelly and Kathryn were hoping to retrieve their fortune.

After hearing that authorities had already learned of one farm where the money was stashed, Ramsey sent 12 year-old Geraldine back to her parents in Oklahoma City by train.

Authorities were waiting for the girl, who, after being captured, innocently told federal agents of Kelly’s hideout in Memphis.

On September 25, 1933, Kelly awoke at his hideout at 1408 Rayner to reading the magazine Master Detective when he suddenly heard a noise outside. He learned that the noise was only the paperboy tossing the morning newspaper.

Walking outside to retrieve the paper, Kelly returned inside failing to lock the door behind him. Moments later, FBI arrived to a surprisingly unlocked door.

Stepping out of the bathroom with a pistol in his hand, Kelly found himself staring down the barrel of a shotgun aimed at his heart as he dropped his gun to the floor, allegedly saying, “G-Men, don’t shoot, I’ve been waiting all night for you.”

Meanwhile, Kathryn was asleep in the back room, so the nationwide manhunt for America’s Most Dangerous ended with their capture in Memphis.

Charged with kidnapping and a bond set at $100,000 each, Kelly and Kathryn were now being held at the county jail which leads to the story of the entire floor of the building at Washington Ave between Second and Third Street being cleared for one single inmate in 1933 – George “Machine Gun Kelly” Barnes. Barnes was monitored around the clock by machine gun toting guards.

Kelly was transferred and served his sentence at Leavenworth and was later transferred to Alcatraz, becoming one of the first prisoners of the infamous federal jail.

Later he was returned to Leavenworth after serving 17 years at Alcatraz and died in prison of an alleged heart attack on July 18, 1954, on his 54th birthday.

Though wanted for multiple murders and deemed to be the world’s most dangerous man, in many reports and interviews, it was later found that Kelly was called a “kind” man who was proved to have never killed anyone and had literally garnered his reputation of “Machine Gun Kelly” from the tall tales of his wife Kathryn, who had shared the stories of an infamous gangster and ruthless killer who toted a machine gun putting fear in the hearts of everyone who might ever meet “Machine Gun Kelly.”

Kathryn Kelly was released from jail in 1958 on parole and died in Tulsa, Oklahoma in 1985 after serving time along with her mother at the Women’s Federal Prison in Alderson, West Virginia.

Currently the old Shelby County Criminal Courts and jail built in 1924 serves as the Shelby County Archives and Hall of Records after the jail moved in 1982 to 201 Poplar Ave.