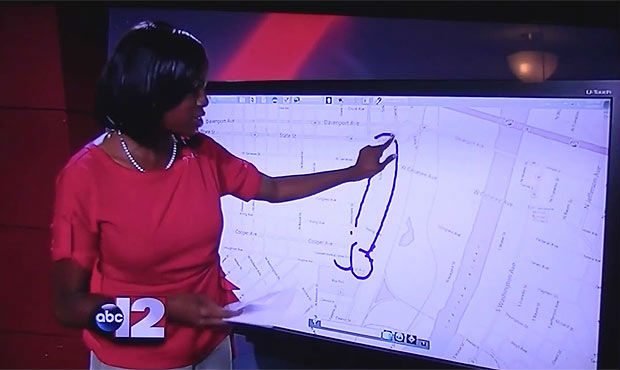 One local news reporter has accidentally ended up in the news herself after drawing a giant p---s on a traffic map during a live TV bulletin.

ABC12 news reporter Siobhan Riley of ABC affiliate WJRT-TV was informing people of driving traffic conditions around a construction zone while illustrating the locations on a map of Saginaw, Michigan.

As Riley began sketching out the locations on the map, a drawing of a giant male member began to form on the large screen.

Lo and behold, there she was, Siobhan Riley, unwittingly had just placed herself, back turned, standing next to a giant p---s on live television.

The mishap was caught by a television viewer who uploaded the video on YouTube captioned with “News reporter fail.”

(ORIGINAL) The first ever upload of a local mid Michigan ABC 12 news reporter drawing an obvious p---s on the screen while describing a construction zone. Please NO RACIST OR SEXIST comments. No one wants to see that. News reporter fail! Subscribe! Check out Rob-n Jared for some cool videos too.