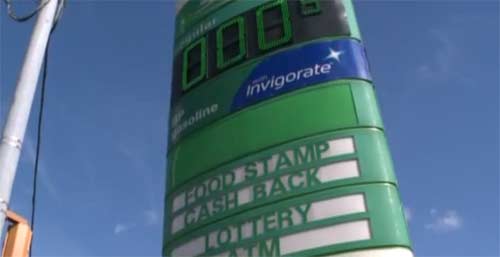 One convenience store in Memphis has been closed for offering too much illegal convenience. ‘Need Weed, need drugs, need pills’ is what one resident in Southeast Memphis says one BP gas station offered conveniently before being closed down as a nuisance.

WREG reports that a Shelby County judge has declared the BP on the corner of Mendenhall and Knight Arnold around Hickory Hill a public nuisance and has shut it down.

Apparently the BP was home to many gang members and drug dealers who used the local gas station as a spot to sell drugs and commit crimes.

Even while reporting the story  on location, WREG  reporters and camera crew witnessed police arresting a couple of suspects for stealing a car.

Reportedly police have responded to dozens of incidents of aggravated assault, robbery and illegal narcotics at the BP.

Apparently, even though the owner of the business reportedly tried hanging signs of the drug dealers to warn them off, undercover agents were able to watch drug sales, and even buy drugs inside the convenience store in front of employees.

The judge has given the owner of the property, Sohail Hemani, a date of October 14 to plead his case, although many residents seemed to be happy to find that the the store was closed and chained.