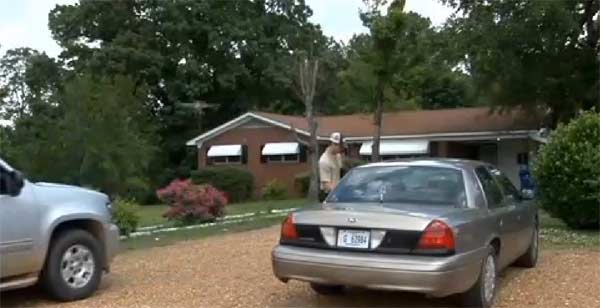 A Mississippi family has become a victim of a horrendous crime committed against them in their own home.

Sheriff deputies in Marshall County Mississippi are investigating a home invasion where a family was tied up and a woman – the mother – was sexually assaulted in front of her children by robbers who broke in to their Mississippi home on Sunday.

Marshall County residents and authorities are shocked and appalled by what has happened in their county where they say ‘they don’t have a lot of problems in that area.’

The family was hogtied for nearly an hour and a half said one family member who lived just next door, reported WREG.

The family member was woke up by one of the children beating on his door screaming for help.

Jewelry, TVs and money were stolen from the family’s home, but that was not the worst of the crime.

When the family member went next door, he found the children’s parents hogtied naked on the ground bleeding from wounds including the woman who was sexually assaulted with her kids right there.

Police have found one of the two cars stolen from the couple in Memphis, while the other car was found in Marshall County.

Investigators say three men were dropped off near the home who walked a stretch of land before forcing their way into the Mississippi family’s home.