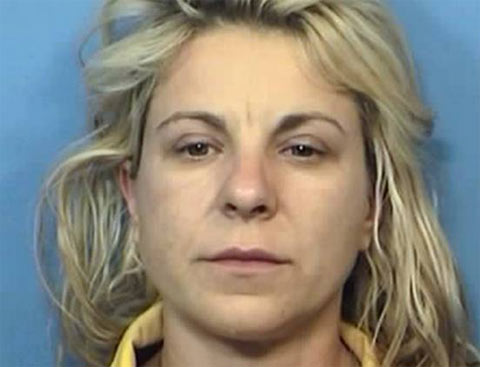 In a bizarre story of a crazed killing and gruesome murders, a middle-age mother has been charged with stabbing her 7 year-old son to death 100 times and stabbing a girl she was babysitting to death 50 times while also killing the family pets – dogs. Furthermore, the woman allegedly slit their throats and her reason for doing it was because she believed they ‘had the devil inside of them.’

Elzbieta Plackowska, 40, of Naperville, Illinois was babysitting 5 year-old Olivia Dworakowski in her parents’ home when the killing spree took place.

According to DuPage County State’s Attorney Robert Berlin, the two children had been playing and bouncing around on the bed before they were ordered to the floor.

It is believed on Tuesday that Plackowska was in a rage from having a dispute with her husband, a truck driver, who is always on the road and the recent death of her father who lived in Poland, which may have contributed to setting off her bizarre rampage.

Moments before the gruesome killings, she reportedly told the children to get on the floor to pray because they were going to heaven tonight.

After killing the two children, Plackowska, who may have been in a panic, went to a local church but found that it was closed. Since the church was closed, Plackowska decided to leave voice message(s) that she had done something wrong. Following this, she reportedly went to a family friend’s home where her college aged son lives and this is were she was arrested.

Both kids were found by police after Olivia’s mother, a nurse – Marta Dworakowski – couldn’t get into her home and didn’t see Plackowska’s car there.

Police discovered the bloody scene described as horrifying with both innocent victims being stabbed numerous times along with the dogs.

Plackowska has been charged with first-degree murder.