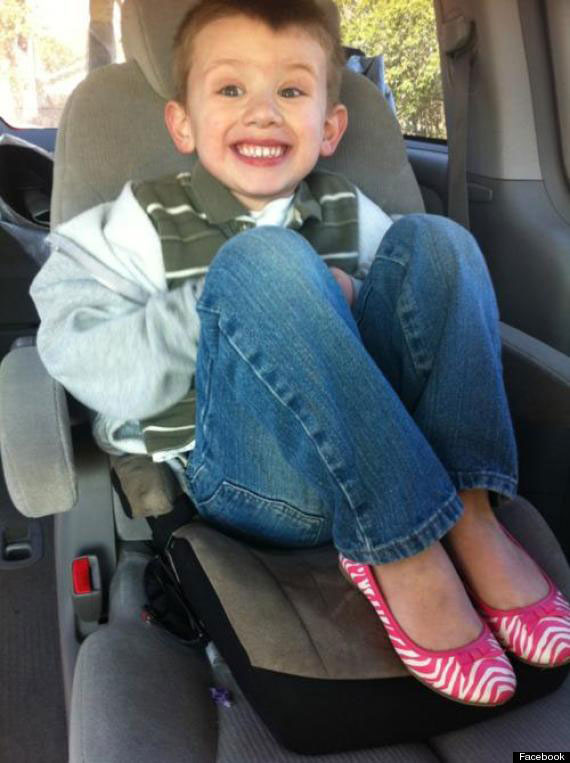 It seems a photo posted on Facebook by a mom of her 5 year old boy wearing pink shoes – specifically girl-like pink zebra print flats – on his first day of preschool, has stirred up controversial debate over the internet.

The mom apparently took the boy, identified only as 5-year-old Sam, to the store to shop for new shoes and “explained to him in the store that the shoes were really made for girls,” according to a Facebook user identifying herself as the boy’s sister.

Sam’s apparent sister posted the photo to the “Have a Gay Day” page, and wrote: 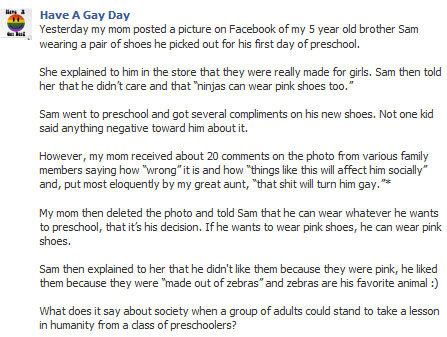 Since posting the photo of her apparent brother in pink shoes, the picture has gotten over 100,000 likes and 20,000 shares.

Sam’s mom evidently had good intentions and the sister does, it seems, also.

Still, a response from another concerned mother and blogger on Cafemom’s The Stir, Mary Fischer, shares her views, which are somewhat in disagreement with Sam’s mom.

Yes, I get the whole “we should let kids be free to express themselves” thing, and I’ll be the first to say “more power” to this mom for taking a chance and letting Sam go off to preschool in his pink zebra print flats.

Somehow I’m guessing if my son were to put on that same pair of shoes — he wouldn’t even make it through the five-minute bus ride to school in the morning before someone laughed at him, asked him why in the heck he was wearing pink shoes, spewed all sorts of mean jokes his way, or told him he was dressed like a girl.

Bullying is bad enough as it is without handing tormentors their material on a silver platter.

The subject of the little boy wearing the pink shoes surely raises many questions and issues.