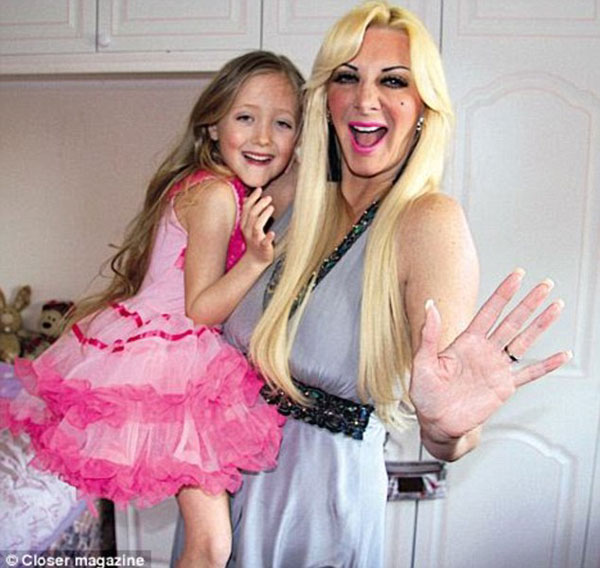 Poppy Burge, 7, received her first voucher for a b--b job worth $9,503 on last year alongside her pamper party after her mother, Sarah Burge, stated that her daughter begged her for a b--b job.

After spending over $500,000 on fine tuning her own image, Sarah Burge, 51, who lives in St Neots, Cambridgeshire finds it exciting getting plastic surgery and meanwhile has been giving her 7 year-old daughter Poppy Burge vouchers to have her own plastic surgery procedures done.

Sarah Burge, after the first voucher for a b--b job, later returned for Christmas with a gift card for liposuction to give to Poppy Burge.

So now what is the fuss about? Sarah Burge calls the gift cards/vouchers she’s giving her daughter Poppy investing in her child’s future and giving her the freedom to do what she wants.

Meanwhile, Sarah Burge says she’s looking to give Poppy Burge beauty treatments worth $190,000 which she can use.

According to Sarah Burge, these gift cards that Poppy has received will not be given to her until after she turns 16, when it is legal.

Burge’s older daughters Charlotte, 27, Hannah, 17 and step-daughter Jazzy have been getting a somewhat similar treatment but with Botox. The older daughter allegedly has plans to get surgery on down the line on their own.